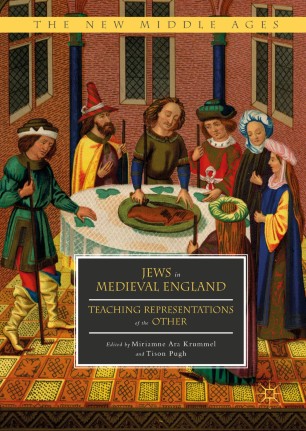 Teaching Representations of the Other

This volume examines the teaching of Jewishness within the context of medieval England. It covers a wide array of academic disciplines and addresses a multitude of primary sources, including medieval English manuscripts, law codes, philosophy, art, and literature, in explicating how the Jew-as-Other was formed. Chapters are devoted to the teaching of the complexities of medieval Jewish experiences in the modern classroom. Jews in Medieval England: Teaching Representations of the Other also grounds medieval conceptions of the Other within the contemporary world where we continue to confront the problematic attitudes directed toward alleged social outcasts.

Miriamne Ara Krummel is Associate Professor of English at the University of Dayton, USA. She is the author of Crafting Jewishness in Medieval England: Legally Absent, Virtually Present (Palgrave Macmillan, 2011) as well as several articles and book chapters.

Tison Pugh is Professor of English at the University of Central Florida, USA. He is the co-editor of Chaucer on Screen: Absence, Presence, and Adapting the Canterbury Tales (2016) and the author of Chaucer’s (Anti-) Eroticisms and the Queer Middle Ages (2014). He has also published several other books, chapters, and articles.