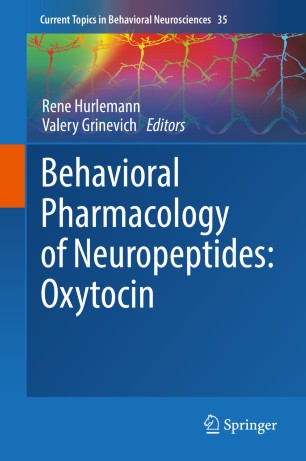 This volume collects cutting-edge expert reviews in the oxytocin field and will be of interest to a broad scientific audience ranging from social neuroscience to clinical psychiatry. The role of the neuropeptide oxytocin in social behaviors is one of the earliest and most significant discoveries in social neuroscience. Influential studies in animal models have delineated many of the neural circuits and genetic components that underlie these behaviors. These discoveries have inspired researchers to investigate the effects of oxytocin on brain and behavior in humans and its potential relevance as a treatment for psychiatric disorders including borderline personality disorder and autism and schizophrenia spectrum disorders. In fact, there is no established social psychopharmacology in Psychiatry, and oxytocin can be seen as the first endogenous agent specifically addressing social-cognitive impairment in psychiatric disorders, with animal research suggesting that it could be especially efficient in the early postnatal period. From a human perspective, it is crucial to understand more precisely who can benefit from potential oxytocin-related treatments, which outcome measures will best represent their effects, how they should be administered, and what brain mechanisms are likely involved in mediating their effects. This type of “precision medicine” approach is in line with the research domain criteria defined by the U.S. National Institute of Mental Health.