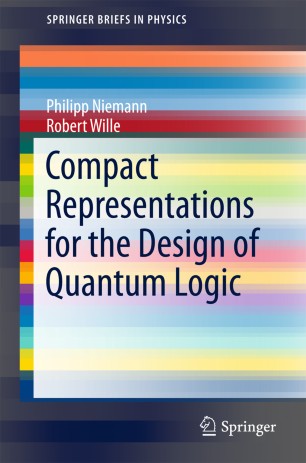 Compact Representations for the Design of Quantum Logic

This book discusses modern approaches and challenges of computer-aided design (CAD) of quantum circuits with a view to providing compact representations of quantum functionality. Focusing on the issue of quantum functionality, it presents Quantum Multiple-Valued Decision Diagrams (QMDDs – a means of compactly and efficiently representing and manipulating quantum logic. For future quantum computers, going well beyond the size of present-day prototypes, the manual design of quantum circuits that realize a given (quantum) functionality on these devices is no longer an option. In order to keep up with the technological advances, methods need to be provided which, similar to the design and synthesis of conventional circuits, automatically generate a circuit description of the desired functionality. To this end, an efficient representation of the desired quantum functionality is of the essence. While straightforward representations are restricted due to their (exponentially) large matrix descriptions and other decision diagram-like structures for quantum logic suffer from not comprehensively supporting typical characteristics, QMDDs employ a decomposition scheme that more naturally models quantum systems. As a result, QMDDs explicitly support quantum-mechanical effects like phase shifts and are able to take more advantage of corresponding redundancies, thereby allowing a very compact representation of relevant quantum functionality composed of dozens of qubits. This provides the basis for the development of sophisticated design methods as shown for quantum circuit synthesis and verification.