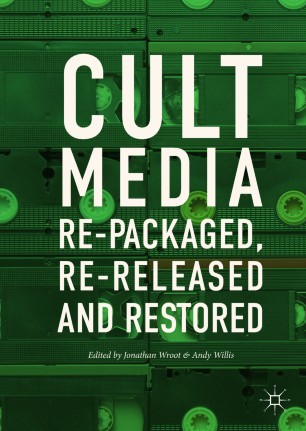 This volume brings together writing on the topic of home media, and in particular releases described as appealing to ‘cult’ fans and audiences. Despite popular assumptions to the contrary, the distributors of physical media maintain a vivid presence in the digital age. Perhaps more so than any other category of film or media, this is especially the case with titles considered ‘cult’ and its related processes of distribution and exhibition. The chapters in this collection chart such uses and definitions of ‘cult’, ranging from home media re-releases to promotional events, film screenings, file-sharing and the exploitation of established fan communities. This book will be of interest to the ever-growing number of academics and research students that are specializing in studies of cult cinema and fan practices, as well as professionals (filmmakers, journalists, promoters) who are familiar with these types of films.

Jonathan Wroot is a Lecturer at the University of Greenwich, UK. He teaches classes within film and media studies. His previous research concerns the distribution and marketing of Japanese cinema and he has published numerous journal articles on the topic in Arts and The Market, The East Asian Journal of Popular Culture, Frames, and Participations.

Andy Willis is a Reader in Film Studies at the University of Salford, UK, and Senior Visiting Curator for Film at HOME, Manchester, UK. He is a co-author of The Cinema of Alex de la Iglesia (2007), and the editor of Film Stars: Hollywood and Beyond (2004). He is also the co-editor of Defining Cult Movies (2003), Spanish Popular Cinema (2004), East Asian Film Stars (2014), and Chinese Cinemas: International Perspectives (2016).

“Through a range of illuminating case studies, this collection develops our understanding of cult media, an increasingly widespread and prominent term both culturally and commercially.  Covering film and television, formal and informal distribution and public and private forms of exhibition, this collection maps the vital role cult plays in contemporary media culture, in categorising forms of media, in articulating audience taste and identity, and in complicating our conceptions of the media text and media ownership.” (Kate Egan, Senior Lecturer in Film Studies, Aberystwyth University, UK)

“Wroot and Willis have assembled a terrific line up of scholars to interrogate the intricacies of cult media distribution and reception, from the VHS era to the digital age. Covering areas as diverse as Japanese horror, Nordic Noir, Brucesploitation and Bollywood from a range of methodological perspectives, Cult Media: Re-packaged, Re-released and Re-stored provides a lucid and engaging assessment of the afterlives of cult movies beyond the move theatre.” (Johnny Walker, Senior Lecturer in Media, Northumbria University, UK)

“Cult Media: Re-packaged, Re-released and Restored is an illuminating collection of essays on the relations between cult media, new technologies, and the repackaging of older media content. This diverse collection – covering media texts, business operations, piracy, the formation of canons and more – provides a range of perspectives on cult media and is recommended to students and scholars alike.” (Jamie Sexton, Senior Lecturer in Film and Television Studies, Northumbria University, UK)

“Cult scholarship has often focused on the semi-mythologised historical contexts of the grindhouse and the midnight movie. This groundbreaking new collection shifts attention to home media and the ways in which VHS, DVD and Blu-ray releases have transformed cult practices. With chapters on everything from distribution companies like Arrow and Criterion through to filesharing and fan vidding communities, Wroot and Willis’s book is essential reading for everyone interested in the changing nature of cult.” (Iain Robert Smith, Lecturer in Film Studies, King’s College London, UK)