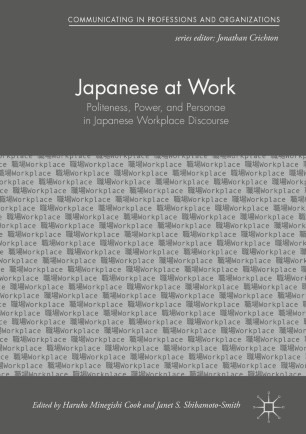 Part of the Communicating in Professions and Organizations book series (PSPOD)

This book empirically explores how different linguistic resources are utilized to achieve appropriate workplace role inhabitance and to achieve work-oriented communicative ends in a variety of workplaces in Japan. Appropriate role inhabitance is seen to include considerations of gender and interpersonal familiarity, along with speaker orientation to normative structures for marking power and politeness. This uniquely researched edited collection will appeal to scholars of workplace discourse and Japanese sociolinguistics, as well as Japanese language instructors and adult learners of Japanese. It is sure to make a major contribution to the cross-linguistic/cultural study of workplace discourse in the globalized context of the twenty-first century.
Haruko Minegishi Cook is Professor of Japanese at the University of Hawaii at Manoa, USA. Her main research interests include language socialization, discourse analysis, and pragmatics. She has published widely on Japanese sentence-final particles and honorifics in edited volumes and major journals.
Janet S. Shibamoto-Smith is Professor Emerita of Anthropology at the University of California, Davis, USA. She is a specialist in Japanese language, society and culture, with an emphasis on the interaction between ideology and practice. Publications include Japanese Women's Language (1985), the edited volume Japanese Language, Gender, and Ideology (with Shigeko Okamoto, 2004), and the The Social Life of the Japanese Language: Cultural Discourses and Situated Practice (co-authored with Shigeko Okamoto, 2016).