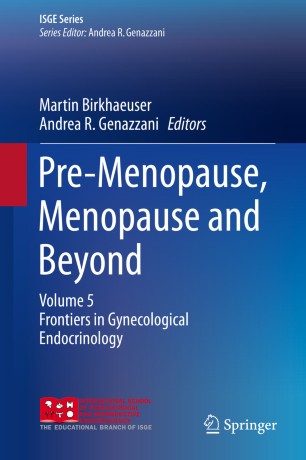 Pre-Menopause, Menopause and Beyond

This volume represents an up-to-date overview on pre-Menopause and Menopause, with their respective clinical implications and therapies. The aim is to clarify possible doubts and clinical approaches to this particular period in a woman’s life and how to face it, both offering solutions to actual problems and focusing on the potential impact of preventive medicine in improving women’s health and quality of life.

This book, covering a very wide range of topics with particular focus on fertility in pre- and peri-menopausal women, climacteric and menopausal symptoms, impact of PCOS on post-menopausal health, breast disease, surgical treatments and therapies, will be an invaluable tool for gynecologists, endocrinologists, and experts in women’s health.

Martin H. Birkhaeuser has been professor and Head of the division of Gynecological Endocrinology and Reproductive Medicine at the University of Berne from 1993 to 2008.

He is founder and first President of the Swiss “Arbeitsgemeinschaft für gynaekologische Endokrinologie und Reproduktionsmedizin” (2004-2010), and was President of the following Swiss Scientific Societies: Swiss Endocrine Society, FIVNAT-CH, Swiss Menopause Society and the Swiss Association against Osteoporosis.

His special interests concern menopause (bone/lipid metabolism, quality of life, impact of HRT) and the Polycystic Ovary Syndrome. In 1987 Martin H. Birkhäuser won the Schering prize for his work on Clomiphene-resistent chronic anovulation in the PCO-Syndrome.

Andrea R. Genazzani has been professor and Director of the Department of Obstetrics and Gynecology of the University of Pisa from 1994 to 2012.

llow at the American College of Obstetricians and Gynecologists (ACOG).

Andrea R. Genazzani is Editor-in-Chief of Gynecological Endocrinology since 1987. He is author of more than 828 papers in peer reviewed journals and Editor of more than 43 books.