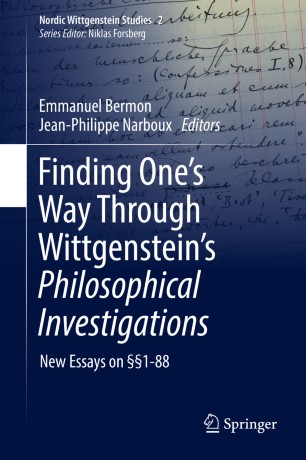 This volume sheds a new light on Philosophical Investigations, Ludwig Wittgenstein’s master opus, by taking a new approach to its first stretch (sections §§1-88), with special emphasis on its atypical opening. The methodological conviction that subtends the volume is that the highly unconventional form assumed by the book is internal to its content and crucial to its reconception of the relation between logic and language. This disconcerting form is dictated by the new modes of criticism deployed by Wittgenstein as he engages the philosophical tradition in the new terms afforded by the revolutionary “method of language-games”. In the essays collected here, seven authors, including some of the most influential figures in the field, offer close and often unorthodox readings of pivotal passages from the beginning of the book. These readings are also shaped by the conviction that the Philosophical Investigations are hardly intelligible apart from an appreciation of the concerns that they inherit from Wittgenstein’s early work, the Tractatus Logico-Philosophicus. The authors contend that we need to consider the continuities between the early and the later works if we are to disclose the true discontinuities between them.

Emmanuel Bermon is Professor of Philosophy at the University of Bordeaux. He is a former member of the Institut universitaire de France and of the Princeton Institute for Advanced Study. He is the author of Le cogito dans la pensée de saint Augustin (Paris: Vrin, 2001), La signification et l’enseignement: commentaire du De magistro de saint Augustin (Paris: Vrin, 2007).

Jean-Philippe Narboux is Associate Professor of Philosophy at the University of Bordeaux. He is a former member of the Institut Universitaire de France. He has recently published “Showing, the Middle Voice and the Unity of the Tractatus” (Philosophical Topics, volume 42, 2, 2016). He is the editor of The Legacy of Thompson Clarke (Brill, 2014) and co-editor (with J.M. Mouillie) of Sartre, L’être et le néant: nouvelles lectures (Paris: Les Belles Lettres, 2015).

“Finding one's way was published for Wittgenstein scholars. … It is high-level scholarship, which should command the attention of anyone involved in Wittgenstein exegesis.” (David Moore Sherry, Mathematical Reviews, October, 2019)
Buy options