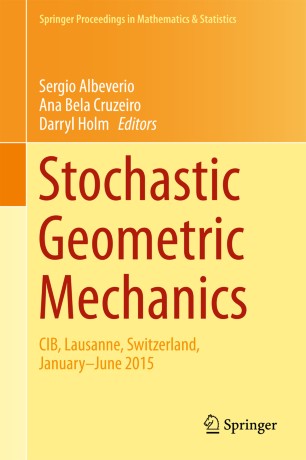 Collecting together contributed lectures and mini-courses, this book details the research presented in a special semester titled “Geometric mechanics – variational and stochastic methods” run in the first half of 2015 at the Centre Interfacultaire Bernoulli (CIB) of the Ecole Polytechnique Fédérale de Lausanne. The aim of the semester was to develop a common language needed to handle the wide variety of problems and phenomena occurring in stochastic geometric mechanics. It gathered mathematicians and scientists from several different areas of mathematics (from analysis, probability, numerical analysis and statistics, to algebra, geometry, topology, representation theory, and dynamical systems theory) and also areas of mathematical physics, control theory, robotics, and the life sciences, with the aim of developing the new research area in a concentrated joint effort, both from the theoretical and applied points of view.

The lectures were given by leading specialists in different areas of mathematics and its applications, building bridges among the various communities involved and working jointly on developing the envisaged new interdisciplinary subject of stochastic geometric mechanics.