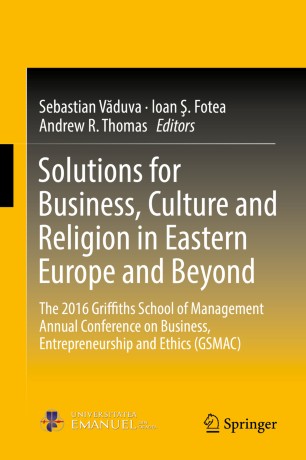 Solutions for Business, Culture and Religion in Eastern Europe and Beyond

The 2016 Griffiths School of Management Annual Conference on Business, Entrepreneurship and Ethics (GSMAC)

This book explores the increased necessity of organizations to encourage human talent in the globalized economy, with particular emphasis on the impact in Eastern Europe. Featuring contributions presented at the 7th Annual Griffiths School of Management International Conference on Business and Ethics (GSMAC) organized by Emanuel University of Oradea, this book presents in-depth analysis of the economic, social and religious implications of the transition from low cost of labor to increased human talent in Eastern Europe and offers multiple theoretical and practical solutions.

In 2004, Klaus Schwab, president and founder of the World Economic Forum, stated that the old era of capitalism and socialism is being replaced by a new era of “talentalism”. The true competitive advantage of organizations and nations is increasingly becoming human talent, defined as the ability to “have new ideas that have value”. Nations and organizations are exploring ways to reform their education systems and organizational structures in order to train, foster and encourage human talent. In Eastern Europe since the fall of communism in 1989, the competitive advantage of the region has been low cost of labor. However, since the integration within the European Union, millions of Eastern Europeans have left their home countries rendering the “low-wage competitive advantage” almost obsolete. In addition, the migration of able-working individuals has left behind mainly children and pensioners, placing a disproportionately heavy burden upon public and government services. It is within this context that the contents of this book explore the impact of the increased need of high human talent on Eastern European countries.

Featuring contributions around topics such as poverty, healthcare management, cross-border cooperation, education systems, and religious influence on economic development, this book will be of interest of scholars, researchers, students and policy-makers interested in the business development and economic growth of Eastern Europe.

Dr. Sebastian A. Văduva is the current Dean of the Griffiths School of Management at the Emanuel University in Oradea, Romania, as well as a management scholar with numerous active ties, academic and entrepreneurial, in both Europe and the United States. He has developed various seminars on leadership and effective management on both micro- and macro-economic levels and is behind several programs intended to boost Romanian economy by drawing in international investors and business partners.

Dr. Ioan Ş. Fotea is a university lecturer at the Emanuel University of Oradea, with an MBA and a PhD in Marketing from the prestigious ASE (Academy for Economic Sciences) in Bucharest, Romania. He is the coordinator of Emanuel University’s Master in Entrepreneurial Management program and owns Advanced Solutions Ltd., an international business consultancy firm, while actively participating in various domestic and international business and social projects.

Dr. Andrew R. Thomas has conducted business in 120 countries on seven continents. A New York Times bestselling author, his books include Aviation Security Management: A Three-Volume Set, Air Rage: Crisis in the Skies and Aviation Insecurity: The New Challenges of Air Travel. He is founding Editor-in-Chief of the Journal of Transportation Security. Often featured on Fox News, MSNBC, CNN, ABC, and other media outlets, he lectures on supply chain security issues around the world.