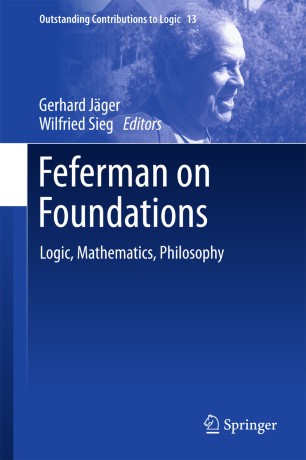 This volume honours the life and work of Solomon Feferman, one of the most prominent mathematical logicians of the latter half of the 20th century. In the collection of essays presented here, researchers examine Feferman’s work on mathematical as well as specific methodological and philosophical issues that tie into mathematics. Feferman’s work was largely based in mathematical logic (namely model theory, set theory, proof theory and computability theory), but also branched out into methodological and philosophical issues, making it well known beyond the borders of the mathematics community.
With regard to methodological issues, Feferman supported concrete projects. On the one hand, these projects calibrate the proof theoretic strength of subsystems of analysis and set theory and provide ways of overcoming the limitations imposed by Gödel’s incompleteness theorems through appropriate conceptual expansions. On the other, they seek to identify novel axiomatic foundations for mathematical practice, truth theories, and category theory.
In his philosophical research, Feferman explored questions such as “What is logic?” and proposed particular positions regarding the foundations of mathematics including, for example, his “conceptual structuralism.” The contributing authors of the volume examine all of the above issues. Their papers are accompanied by an autobiography presented by Feferman that reflects on the evolution and intellectual contexts of his work. The contributing authors critically examine Feferman’s work and, in part, actively expand on his concrete mathematical projects. The volume illuminates Feferman’s distinctive work and, in the process, provides an enlightening perspective on the foundations of mathematics and logic.

Gerhard Jäger is a Professor of Logic and Theoretical Computer Science at the University of Bern. He received his PhD from the University of Munich in 1980. From 1979 to 1986, he was engaged in postdoctoral work at the Universities of Oxford, Munich and Stanford, as well as the ETH Zurich. From 1986 to 1988, he was an Assistant Professor of Computer Science at the ETH Zurich. In 1988, he joined the Faculty of Natural Sciences of the University of Bern, first as an Associate Professor of Computer Science, and since 1992, as a Full Professor of Logic and Theoretical Computer Science. He served as the Dean of this faculty from 2002 to 2004 and as member of the Research Council of the Swiss National Science Foundation from 2004 to 2012. His internationally well established research focuses on mathematical logic, in particular proof theory, and the logical aspects of computer science.
Wilfried Sieg is Patrick Suppes Professor of Philosophy at Carnegie Mellon University, USA. He received his PhD from Stanford University in 1977. From 1966 to 1985, he was an Assistant and Associate Professor at Columbia University, USA. In 1985, he joined the Carnegie Mellon faculty as a founding member of the University’s Philosophy Department and served as its Head from 1994 to 2005. He is internationally known for his mathematical work in proof theory, historical work on modern logic and mathematics, and philosophical essays on the nature of mathematics. Sieg is a Fellow of the American Academy of Arts and Sciences.

Koellner’s contribution stands in contrast to Parsons’s paper which provides an excellent exposition of Feferman’s philosophy from a neutral perspective. ... This volume is an extraordinary tribute to the person Solomon Feferman and his work. It contains material which should inspire future generations to pursue his ideas, be it on the technical side or on the philosophical side.” (Reinhard Kahle, Philosophia Mathematica, Vol. 28 (3), 2020)
Buy options