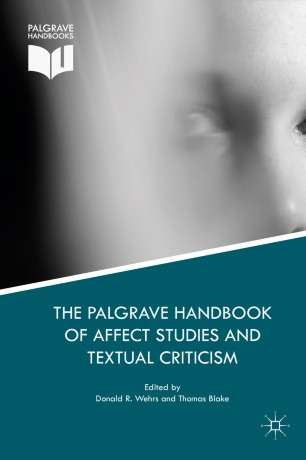 The Palgrave Handbook of Affect Studies and Textual Criticism

This volume provides a comprehensive account of how scholarship on affect and scholarship on texts have come to inform one another over the past few decades. The result has been that explorations of how texts address, elicit, shape, and dramatize affect have become central to contemporary work in literary, film, and art criticism, as well as in critical theory, rhetoric, performance studies, and aesthetics. Guiding readers to the variety of topics, themes, interdisciplinary dialogues, and sub-disciplinary specialties that the study of interplay between affect and texts has either inaugurated or revitalized, the handbook showcases and engages the diversity of scholarly topics, approaches, and projects that thinking of affect in relation to texts and related media open up or enable. These include (but are not limited to) investigations of what attention to affect brings to established methods of studying texts—in terms of period, genre, cultural contexts, rhetoric, and individual authorship.

Donald R. Wehrs is Hargis Professor of English Literature at Auburn University, where he teaches eighteenth-century British literature, critical theory, and comparative literature. He is editor of Levinas and Twentieth-Century Literature (2013), co-editor of Cognition, Literature, and History ( 2014), and co-editor of Levinas and Nineteenth-Century Literature (2009). He has published three monographs on twentieth-century African fiction—Pre-Colonial Africa in Colonial African Narratives (2008), Islam, Ethics, Revolt  (2008), and African Feminist Fiction and Indigenous Values (2001)—as well as book chapters and journal articles on British fiction, Shakespeare, postcolonial literature, and medieval romance.

Thomas Blake is Assistant Professor of English and Philosophy at Monroe Community College, New York. He is author of “Maternity, Morality, and Metaphor: Galdos’s Doña Perfecta, Lorca’s The House of Bernarda Alba, and Andalusian Culture,” in Cognition, Literature, and History (2014) and “Staging Heidegger: Corporeal Philosophy, Cognitive Science, and the Theater” in Destiny, the Inward Quest, Temporality and Life (Springer, 2011).