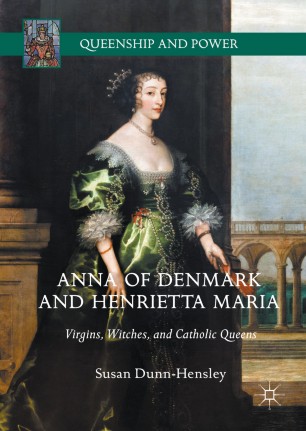 Anna of Denmark and Henrietta Maria

This book examines how early Stuart queens navigated their roles as political players and artistic patrons in a culture deeply conflicted about the legitimacy of female authority. Anna of Denmark and Henrietta Maria both employed powerful female archetypes such as Amazons and the Virgin Mary in court performances. Susan Dunn-Hensley analyzes how darker images of usurping, contaminating women, epitomized by the witch, often merged with these celebratory depictions. By tracing these competing representations through the Jacobean and Caroline periods, Dunn-Hensley peels back layers of misogyny from historical scholarship and points to rich new lines of inquiry. Few have written about Anna’s religious beliefs, and comparing her Catholicism with Henrietta Maria’s illuminates the ways in which both women were politically subversive. This book offers an important corrective to centuries of negative representation, and contributes to a fuller understanding of the role of queenship in the English Civil War and the fall of the Stuart monarchy.