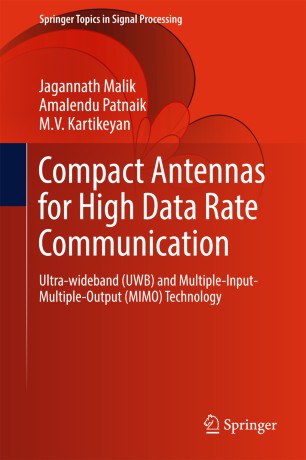 These wireless communication technologies enable consumers to have convenient access to a wide range of services – anytime, anywhere. And the introduction of wireless mobile access points eliminates the limitations to communication imposed by geographical location. The Internet has allowed people to access and share information much more rapidly, but in order to achieve higher data rates with the limited available resources and imposed constraints, wireless communication technology needs to be pushed beyond the physical limits of the propagation channel. This book contributes to achieving this goal.

Dr. Jagannath Malik received his Integrated Dual Degree (B. Tech and M. Tech) and Ph.D. in Electronics and Communication Engineering from Indian Institute of Technology Roorkee in 2011 and 2016 respectively. He is currently with Ulsan National Institute Science and Technology, Ulsan, Republic of Korea, as a post-doctoral research fellow in Department of Electrical and Computer Engineering. His major field of research is antennas and microwave circuits for wireless communications and application of soft-computing techniques in microwave domain. He received Young Scientist award from Uttarakhand State Council for Science and Technology in 2012. He also received Young Scientist award from International Union of Radio Science (URSI) in 2015.

Dr. Amalendu Patnaik received his Ph.D. in Electronics from Berhampur University, Odisha, India in 2003. He is currently an Associate Professor at the Department of Electronics and Communication Engineering, Indian Institute of Technology Roorkee (IIT Roorkee), India. In 2004–05, he was a visiting scientist at the University of New Mexico, Albuquerque, USA. He is the author/co-author of over 80 peer-reviewed papers in international journals and conferences, has co-authored one book on engineering electromagnetics, and a chapter on neural networks for antennas in the Modern Antenna Handbook (Wiley). His research interests include antenna array signal processing, application of soft-computing techniques in electromagnetics, computer-aided design (CAD) for patch antennas, electromagnetic interference (EMI) and electromagnetic compatibility (EMC). He was awarded the IETE Sir J.C. Bose Award in 1998, URSI Young Scientist Award in 2005 and BOYSCAST Fellowship from the Department of Science and Technology, Government of India in 2004–05. He serves as an editorial board member for the International Journal of RF and Microwave Computer Aided Engineering, and as an IEEE AP-S Region 10 Distinguished Speaker for 2015–16. Dr. Patnaik is a life member of the Indian Society for Technical Education (ISTE) and a senior member of the Institute of Electrical and Electronics Engineers (IEEE).

Prof. M.V. Kartikeyan received his M.Sc. and Ph.D. degrees in Physics and Electronics Engineering from Banaras Hindu University (BHU)/Indian institute of Technology–BHU, Varanasi, India, in 1985 and 1992, respectively. He was a research scientist at the Central Electronics Engineering Research Institute, Pilani, India, from 1989 to 2001 and also worked at the Institute for Pulsed Power and Microwave Technology, Karlsruhe Institute of Technology, Germany. He joined the Department of Electronics and Computer Engineering, Indian Institute of Technology Roorkee (IIT Roorkee), India, as an Associate Professor, in 2003, and became a full Professor in 2009. He is the principal author of three books, more than 85 technical papers in peer-reviewed transactions/ journals, and around 190 conference publications. His current research

interests include millimeter/terahertz (THz) wave engineering (high-power sources and components), microstrip antennas and filters, microwave integrated circuits, and radio frequency (RF) and microwave design with soft computing techniques. He is a senior member of the Institute of Electrical and Electronics Engineers (IEEE), fellow of the Institution of Engineering and Technology (UK), Institution of Electronics and Telecommunications Engineers (India), Institution of Engineers (India), and the Vacuum Electronic Devices and Applications Society (India). He currently serves on the editorial advisory board of the Journal of Infrared, Millimeter and Terahertz Waves (Springer). Prof. Kartikeyan is a recipient of the Hildegard-Maier Research Fellowship for Electrical Sciences of the Alexander von Humboldt Foundation (1998–2000) and the Alexander von Humboldt Research Fellowship (2001–2003, June/July 2011, 2012).