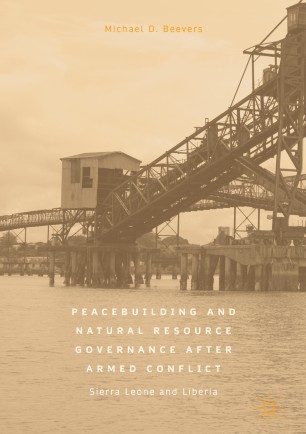 This book argues that a set of persuasive narratives about the links between natural resource, armed conflict and peacebuilding have strongly influenced the natural resource interventions pursued by international peacebuilders. The author shows how international peacebuilders active in Liberia and Sierra Leone pursued a collective strategy to transform “conflict resources” into “peace resources” vis-à-vis a policy agenda that promoted “securitization” and “marketization” of natural resources. However, the exclusive focus on securitization and marketization have been counterproductive for peacebuilding since these interventions render invisible issues connected to land ownership, environmental protection and sustainable livelihoods and mirror pre-war governing arrangements in which corruption, exclusion and exploitation took root. Natural resource governance  and peacebuilding must go beyond narrow debates about securitization and marketization, and instead be a catalyst for trust–building and cooperation that has a local focus, and pursues an inclusive agenda that not only serves the cause of peace, but the cause of people.
Michael D. Beevers is Assistant Professor of Environmental and International Studies at Dickinson College, USA.

“At the turn of the last century, high-value natural resources like diamonds and timber helped fund devastating wars in Liberia and Sierra Leone. Many academics and practitioners concluded that effective peacebuilding would require the reform of these sectors. In a carefully conceived study based on years of fieldwork, Michael Beevers argues that the peacebuilding community embraced, emphasized and operationalized this idea in ways that simplified a complex reality, concentrated power in the state, and marginalized alternative views and competing priorities. The ironic end result, Beevers claims, is that the tensions and disagreements that preceded the outbreak of violent conflict have, in some cases, been ignored, and, in other cases, been restored. Beevers makes a significant contribution to the evolving concept of environmental peacebuilding.” (Richard Matthew, University of California, Irvine, USA)“With this meticulously researched book, Michael Beevers threads the needle to make substantial contributions to both scholarship and practice. His case analysis of post-conflict Liberia and Sierra Leone advances evolving theory around environmental peacebuilding, taking tangible steps beyond the field’s early deductive days. At the same time, his explication of dominant post-conflict natural resource management approaches reveals specific shortcomings that should help shape future efforts.” (Geoffrey Dabelko, Ohio University and the Woodrow Wilson International Center for Scholars, USA)