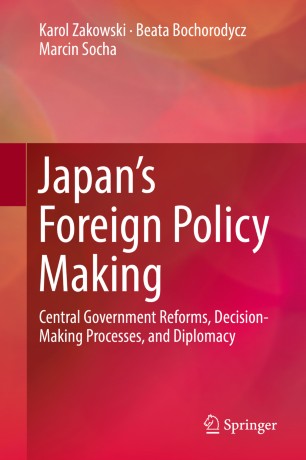 This book evaluates the impact of the 2001 central government reforms on effective foreign policy making in Japan. It puts a special focus on the evolution of the domestic institutional factors and decision-making processes behind Japan’s foreign policy, while also analyzing the development of Japan’s external relations with various other countries, such as the US, China and North Korea. Adhering to the neoclassical realist approach, the authors show that, thanks to a more independent Kantei-based form of diplomacy, Japan’s prime ministers were able to strategically respond to international developments, and to pursue their own diplomatic endeavors more boldly. At the same time, they demonstrate that the effectiveness of this proactive posture was still heavily dependent on the decision-makers’ ability to form cohesive coalitions and select suitable institutional tools, which enabled them to influence domestic and international affairs.

Karol Zakowski, PhD (2010) and habilitation (2016) in political science, is an Associate Professor of International Relations at the Department of Asian Studies, Faculty of International and Political Studies, University of Lodz. He was a visiting scholar at the Kwansei Gakuin University (2008-2009), Keio University (2012-2013, Japan Foundation Japanese Studies Fellowship), and National Graduate Institute for Policy Studies in Tokyo (2016). His research focuses on the evolution of the Japanese political scene and Sino-Japanese relations. He is author of Decision-Making Reform in Japan: The DPJ’s Failed Attempt at a Politician-Led Government (London and New York: Routledge, 2015), as well as other books, journal articles, and book chapters.

Beata Bochorodycz is an Associate Professor at the Chair of Oriental Studies, Adam Mickiewicz University (AMU) in Poznan. MA in Japanese studies at AMU (1993); MA in law at the Law Department of Kyushu University, specializing in Japanese politics (2001); PhD at the Institute of Political Studies, Polish Academy of Science (PAN) in Warsaw (2006). Additionally, she was a fellow of the International Rotary Club (1993-1995), the Japanese Ministry of Education (1997-2001), and Japan Foundation (2013-2014). Visiting Professor at Yokohama National University (2008-2009), and visiting scholar at GRIPS in Tokyo (Sep.-Oct. 2016). Research focus: modern political and social history of Japan, policy process in public administration, foreign policy, the Okinawa problem in Japan–US relations. An author of several articles and books, including The Changing Patterns of Policy Making in Japan (Poznan: Wydawnictwo Naukowe Uniwersytetu im. Adama Mickiewicza, 2010).

Marcin Socha, PhD (2015) in international relations, is an Assistant Professor of International Relations at the Department of Asian Studies, Faculty of International and Political Studies, University of Lodz. His research focuses on changes in Japanese energy and climate policy. He is a research associate in the Center for Asian Affairs in Lodz, Poland, with a focus on Japan's paradiplomacy and policy towards Central and Eastern Europe.