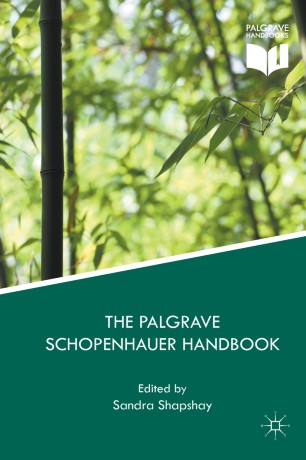 This comprehensive Handbook offers a leading-edge yet accessible guide to the most important facets of Arthur Schopenhauer’s philosophical system, the last true system of German philosophy.  Written by a diverse, international and interdisciplinary group of eminent and up-and-coming scholars, each of the 28 chapters in this Handbook includes an authoritative exposition of different viewpoints as well as arguing for a particular thesis.  Authors also put Schopenhauer’s ideas into historical context and connect them when possible to contemporary philosophy.

The Palgrave Schopenhauer Handbook is an essential resource for scholars as well as advanced students of nineteenth-century philosophy. Researchers and graduate students in musicology, comparative literature, religious studies, English, French, history, and political science will find this guide to be a rigorous and refreshing Handbook to support their own explorations of Schopenhauer’s thought.

Sandra Shapshay is Associate Professor of Philosophy and Director of the Political and Civic Engagement Program at Indiana University-Bloomington, USA. Her research focuses on Kant and Schopenhauer’s aesthetic and ethical theories, as well as contemporary environmental aesthetics. Shapshay is working on a book that reconstructs Schopenhauer’s ethical thought for contemporary use, and has also published numerous articles and book chapters on Schopenhauer’s metaphysics, views on freedom, the sublime, and tragedy. With Levi Tenen, she is editing a special issue of the Journal of Aesthetics and Art Criticism on environmental aesthetics and ethics.