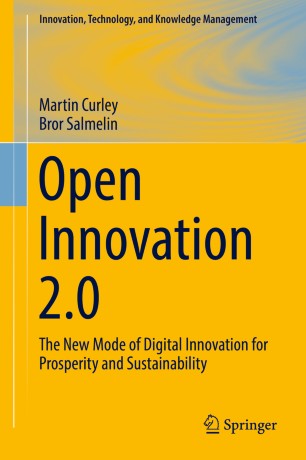 The New Mode of Digital Innovation for Prosperity and Sustainability

This book presents the emerging paradigm and methodology, Open Innovation 2.0 (OI2), which aims to help drive significant structural changes and benefits through digital innovation to society and industry. It highlights how new services and markets can be co-created in open ecosystems and how this leads to a transformation from win-lose to win-win situations for all stakeholders. Organized around a number of core patterns of OI2, such as shared purpose, partnering and platforms, this book leverages more than five years of research by the EU Open Innovation Strategy Policy group.

Popularized in the early 2000s, open innovation is a systematic process by which ideas can pass among organizations and travel on different exploitation vectors for value creation. With the simultaneous arrival of multiple digital disruptive technologies and rapid evolution of the discipline of innovation, it became apparent that an entirely new approach to innovation was needed that incorporated technological, societal and policy dimensions. Unlike other innovation methodologies, OI2 is an innovation paradigm and methodology with a purpose: to seek and deliver innovations that move us collectively on to a trajectory towards sustainable intelligent living. OI2 is a paradigm advocating for disruptions, seeking the unexpected and providing support for rapid scale-up of successes. As a method, it provides a safety net for both innovations and innovators, inspiring innovators to have the confidence and courage to innovate.

Featuring case studies from domains such as energy, telecommunications, transportation, and finance and from companies including Intel, Lego, Alcatel Lucent and Alstom, this book is useful to industry executives, policy makers, academics, and students of innovation and innovation management.

Martin Curley is Professor of Innovation at Maynooth University, Ireland. He is co-founder of the Innovation Value Institute, an industry-academic open innovation consortium that strives to research and promote structural change in the way companies and governments achieve value through information technology. He chairs the European Union Open Innovation Strategy and Policy group (OISPG), an industry-led group advising on strategic priorities for open and service innovation and is a member of the EU Connect Advisory Forum and the EU Horizon 2020 Advisory Group on international Cooperation. Martin is also Senior Vice President and Group Head for Global Digital Practice at MasterCard providing digital thought and practice leadership to MasterCard customers. Previously he was vice president at Intel Corporation and director of Intel Labs Europe, the company's network of more than 40 research labs, development centers and open innovation collaborations spanning the European region. He also served as a senior principal engineer at Intel Labs Europe and lead Intel's research and innovation engagement with the European Commission and the broader European Union research ecosystem.

Before assuming his current position in 2009, Curley was global director of IT innovation at Intel. Earlier in his Intel career, he held a number of senior IT management and automation positions for Intel in the United States and Europe. Before joining Intel in 1992, he held management and research positions at General Electric in Ireland and at Philips Electronics in the Netherlands. Curley is the author or co-author of five books and dozens of papers on technology management for value, innovation and entrepreneurship. He is a Member of the Royal Irish Academy, fellow of the Institution of Engineers of Ireland, the British Computer Society, the Irish Computer Society and the Irish Academy of Engineering. Martin was previously a visiting scholar at MIT Sloan Centre for Information Systems Research and was awarded joint European Chief Technology Officer of the year for 2015/2016.

Bror Salmelin is Advisor for Innovation Systems, DG Communications Networks, Contents and Technology at the European Commission. He was the deputy of the IT department of the Finnish Technology and Innovation Agency in 1984-97. In this capacity he represented Finland in the EU ESPRIT and ICT research programmes. He was the EFTA chair and co-designer of the global Intelligent Manufacturing Systems initiative since 1990. He was representing Finland in the Consulate of Los Angeles as Vice Consul in 1997-98 with the responsibility to build bridges between the Finnish and Californian innovation systems and moved in 1998 to European Commission to lead the units of Integration in Manufacturing, later eCommerce and Collaborative work before becoming advisor to the DG. He is the initiator of the European Network of Living Labs which now has more than 350 sites worldwide, and also the initiator of the Open Innovation activities in the European Commission. He is member of the New Club of Paris, IVI advisory board and founder of the EU OISPG.