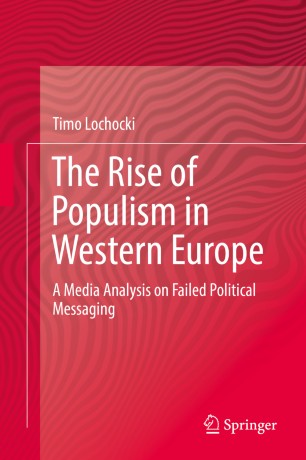 The Rise of Populism in Western Europe

This book explores the question of why and under which conditions right-wing populist parties receive electoral support. The author argues that neither economic variables, nor national culture or history are what account for their successes. Instead, he illustrates that the electoral success of populist parties in Western Europe, such as the French Front National or the Alternative for Germany, is best understood as the unintended consequence of misleading political messaging on the part of established political actors.

A two-level theory explains why moderate politicians have changed their approaches to political messaging, potentially benefiting the nationalist, anti-elitist and anti-immigration rhetoric of their populist contenders. Lastly, the book’s theoretical assumptions are empirically validated by case studies on the immigration societies of Germany, the Netherlands and Sweden.

"Timo Lochocki’s fascinating book systematically shows that the fortunes of nationalist parties depend, at least in part, on the positions adopted by their more mainstream competitors."

"This book provides valuable insights into populist radical-right politics in Western Europe. Timo Lochocki argues that a “crisis of conservatism” created the perfect context for the rise of nationalist parties."

"Timo Lochocki’s book uses high-quality comparative research to tackle numerous misperceptions and mistaken assumptions about the rise and persistence of nationalist parties across Europe. It is a must-read for anybody following the debate on where Europe is today and where it might be tomorrow."

Dr. Timo Lochocki is a transatlantic fellow with the Europe program where he directs GMF’s research activities on European diversity and party politics. He studied social psychology and international politics in Germany, Norway, and the United States and holds a Ph.D. in comparative politics from the Humboldt University Berlin, where he is a lecturer for European Politics. His award-winning research focuses on the intersection between international policy challenges (migration and matters of European Integration, in particular) and European party politics. Explaining the varying electoral advances of right-wing populist parties in Europe over the last 30 years, his doctoral thesis was graded as summa cum laude. His GMF Europe policy paper "The Unstoppable Far Right? How established parties’ communication strategies and media reporting of European affairs affect the advances of right-wing populist parties" won the award for the best paper at the European Communication Research and Education Association (ECREA) Conference 2015. He regularly comments European and German party politics for national and international news outlets as Der Tagesspiegel, The Economist, Politico Europe or The London Times.