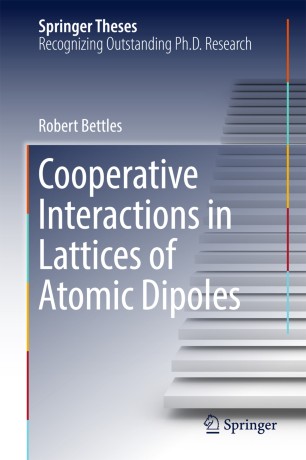 This thesis reports the remarkable discovery that, by arranging the dipoles in an ordered array with particular spacings, it is possible to greatly enhance the cross-section and achieve a strong light-matter coupling (>98% of the incident light). It also discusses the broad background to cooperative behaviour in atomic ensembles, and analyses in detail effects in one- and two-dimensional atomic arrays. In general, when light interacts with matter it excites electric dipoles and since the nineteenth century it has been known that if the amplitude of these induced dipoles is sufficiently large, and their distance apart is on the scale of the wavelength of the light, then their mutual interaction significantly modifies the light–matter interaction. However, it was not known how to exploit this effect to modify the light–matter interaction in a desirable way, for example in order to enhance the optical cross-section.

Robert Bettles graduated from Durham University in 2012 with an MPhys in Theoretical Physics. He stayed in Durham to study his PhD in the Atomic and Molecular Physics group (AtMol), working under the supervision of Profs Charles Adams and Simon Gardiner. He is currently working as a PostDoc in the same group.