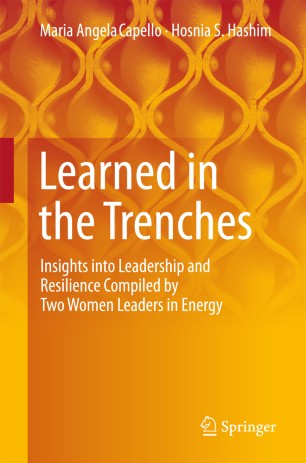 Learned in the Trenches

This book shares the learnings and perspectives of two pioneer women who waded the many challenges posed by multiculturalism and gender in one of the corporate environments more rigid and traditional in the business world: the energy sector in the Middle East.
How they managed to create a growth space for themselves and their teams is a story of professional and personal tenacity, shaping a privileged perspective that enabled them to understand the root causes of barriers, as well as envision plausible solutions.
They propose in the book not only their vision, but a remarkable collection of unfiltered interviews to influential leaders in the energy sector, to complete a vision of what is key to achieve success when leading or consulting in a corporate environment. The book offers a compilation of very personal approaches to professionalism, resilience, work, and ultimately, success, from within and outside the ranks of highly regarded corporations in the energy sector. The ultimate aim is that of triggering a self-reflection in the readers, grounded on the learnings and perspectives of those who made it to the highest roles of one of the less understood business environments.

Maria Angela Capello is an experienced consultant for the Oil and Gas industry, expert in field development and monitoring strategies, instrumental in launching innovative implementations in Latin America, USA and the Middle East. She currently works as an executive advisor in Kuwait Oil Company (KOC), for the Greater Burgan Asset, in the planning and strategic initiatives of the Directorate. She formerly worked for Halliburton and PDVSA.

A Physicist from the Simon Bolivar University (Venezuela), with a MS in Geophysics from the Colorado School of Mines (USA), Maria volunteers extensively for professional societies, and was Vice-President of SEG in 2005. She has received the SEG “Honorary Lifetime Membership”, and the SPE “Distinguished Member” and “Regional Service” awards, due to her exceptionally meritorious service and notable career in the oil industry.

Hosnia Hashim is an executive of the Kuwait oil sector, with a stellar career that has taken her to reach highest role so far assumed by a woman in the upstream sector of Kuwait.

Ms. Hosnia is the Vice President of Operations KUFPEC (Kuwait Foreign Petroleum Exploration Company), accountable for the international operations of the State of Kuwait, in 15 countries spanning three continents. Before, Ms. Hosnia had been Deputy CEO of the North Kuwait asset of Kuwait Oil Company (KOC), in charge of 1,200 employees to produce 700,000 barrels of oil per day.

She sits in the Board of Directors of the Society of Petroleum Engineers. Among many awards, she has recently been selected as “Oil and Gas Woman of the Year” by ADIPEC, one of the most important organizations in the oil sector, for her successful achievements of worldwide resonance.