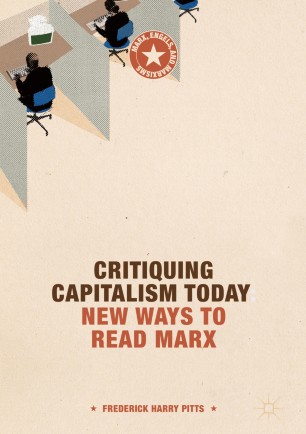 This book critically introduces and compares two of the most compelling contemporary schools of Marxist thought: the German Neue Marx-Lekture, or New Reading of Marx, and Italian postoperaismo. In so doing, it radically updates our understanding of the key categories of Marx’s critique of political economy- including value, money, labour, class and crisis- in light of new and exciting theoretical developments. The New Reading of Marx reevaluates Marx’s Capital in the shadow of the first-generation Frankfurt School, finding an increasing uptake in the Anglophone world. Postoperaismo reconceptualises Marx’s work in the wake of the Grundrisse, its theories of immaterial labour and capitalist crisis finding growing favour beyond the radical fringe via recent bestsellers like Paul Mason’s Postcapitalism. Drawing on the first to engage in a pathbreaking critique of the second at a time of peak interest in its optimistic prospectus, the book brings into critical dialogue important modern thinkers such as Michael Heinrich, Werner Bonefeld, and Antonio Negri. In so doing, Critiquing Capitalism Today serves as both an introduction to each of these radical reinterpretations of Marx’s critique of political economy, and a contribution to continuing debates within and between these and other strands of contemporary Marxism. Advancing knowledge in the field by bridging recent scholarship with older material, including the works of Marx himself, Theodor Adorno and Alfred Sohn-Rethel, it relates theoretical disputes with their historical context in capitalist society itself, keeping an empirical focus that clarifies complex conceptual material for readers new to these cutting-edge currents of critical thought.

Frederick Harry Pitts is Lecturer in Management at the School of Economics, Finance and Management, University of Bristol, UK.

“The theory of value introduced in this book abandons the dialectic, and seems to justify the capitalist mode of production via a sort of Millian utilitarianism, where the concept of ‘happiness’ is replaced by ‘social validation.’ Eventually, the crises of overproduction – necessary within the capitalist mode of production – would be deduced from ‘social validation,’ i.e., from an effect, and not from intrinsic causal laws.” (Dario Cositore, Contemporary Political Theory, Vol. 19 (4), December, 2020)“This book rejects the idea that we have entered a postcapitalist reality as at best wishful thinking and pure ideology at worst. Pitts looks into the eye of the storm that is brewing all around us, laying bare the sheer unrest of life in a system of wealth in which money only counts as more money. A remarkable book.” (Werner Bonefeld, Professor of Politics, University of York) “This book challenges postoperaismo’s overestimation of workers’ power and its recent reception in postcapitalist dreams of an automated future. Maturing in these pages is a new way to read Marx and understand resistance in a money-dominated world.” (Ana Dinerstein, Associate Professor of Sociology, University of Bath)

“Too much fashionable thinking on the left lacks rigour and an appreciation of the history of Marxist thought. This is especially the case when we consider value theory and alternative approaches to the world of work. In contrast this exceptional book knows its subject matter- and demands to be read by anyone who claims allegiance to the contemporary left.” (Jon Cruddas MP, Visiting Professor, Centre of Sustainable Work and Employment Futures, University of Leicester)