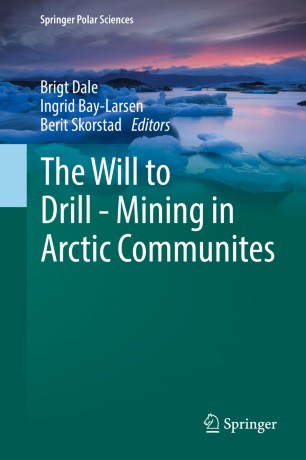 The Will to Drill - Mining in Arctic Communites

This book focuses on the connections between mining activities, knowledge politics and the valuation of landscape in selected case sites in Russia, Greenland and Norway, whilst considering the interrelated aspects of industrialized, natural resource based development and environmental concerns in the Arctic. The case studies in these three different countries reveals that there are indeed multiple ‘Arctics’ – not least concerning the way extractive industries are received and perceived – and that national legislation, public awareness and economic alternatives are amongst the variables that influence to what extent environmental ramifications of mining are accepted.

Through analysis of political discourses, legal documents, grey literature, discussions in local and national media and empirical material from in-site fieldwork, the authors seek to understand how debates about mining reveal more general conflicts and concerns about how to define sustainability.

The book contributes to the overall debates on both extractive industries and development trends in the Arctic, and will as such be of interest for both established scholars and students – as well as policy makers and the public.

The compilation of cases and variety of analytical perspectives will further stimulate the ongoing debates concerning the impacts of extractive industries on communities – both in the Arctic and beyond.

Brigt Dale is a Senior Researcher at Nordland Research Institute in Bodo, Norway, in their Environment and Society research group. With background in visual and social anthropology and political science, a combination of ethnographic approaches, security theory and a critical constructivist approach has permeated his research.  Over the past decade he has been focussing mainly on the political, social, cultural and economic preconditions for and consequences of extractive industries’ activities in Arctic communities. His PhD work on petroleum development in the Arctic was financed through the International Polar Year initiative (2007-08), and in the following years he has been participating in several international research projects, focusing on petroleum as a challenge to Arctic societies, on mining activities in communities, and on sustainability challenges in the aquaculture and primary industries. Dale lives and works out of the Lofoten islands, Northern Norway.

Ingrid Bay-Larsen is a research director at Nordland Research Institute, heading the Environment and Society research group. The group provides scientific knowledge on sustainable development of northern communities, particularly how these communities can meet climatic and socioeconomic change. Their wide project portfolio has a specific focus on primary and extractive industries, and the transformation to low carbon societies in the north. Bay-Larsen’s research over the last fifteen years has investigated how values, ethics, knowledge systems and environmental risks are perceived and institutionalised in environmental governance. This also includes the interrelation between science and politics, and the role that different forms of knowledge have in ensuring efficient and legitimate environmental decisions. Bay-Larsen has been involved in EU-projects focusing on remediation of contaminated ecosystems, including areas in use for food production. How to define and resolve environmental problems across institutional and geographical scales have also been prevalent in her experience from US, Brazil, Russia and several other European countries.

Berit Skorstad is a professor in Sociology at Nord University in Bodo, Norway, and leads the Research group for environmental, Arctic and international studies at Faculty of social science. Skorstad also teaches in environmental sociology and sociological theory, and her research has focused on environmental politics and ethics, publishing broadly on these topics. She has participated in a number of international research project the last two decades both in environmental and ethical aspects of fisheries and coastal zone management in Europe as well as environmental and social aspect of mining. She is the project leader of ARCTICFRONT (The Arctic as a mining Frontier), which has been the primary source of financing for the work presented in this book.