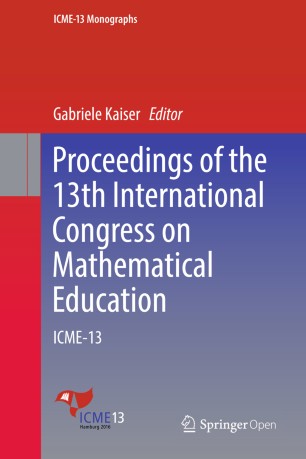 Proceedings of the 13th International Congress on Mathematical Education

This book is open access under a CC BY 4.0 license.
The book presents the Proceedings of the 13th International Congress on Mathematical  Education (ICME-13) and is based on the presentations given at the 13th International Congress on Mathematical Education (ICME-13). ICME-13 took place from 24th- 31st July 2016 at the University of Hamburg in Hamburg (Germany). The congress was hosted by the Society of Didactics of Mathematics (Gesellschaft für Didaktik der Mathematik - GDM) and took place under the auspices of the International Commission on Mathematical Instruction (ICMI). ICME-13 brought together about 3.500 mathematics educators from 105 countries, additionally 250 teachers from German speaking countries met for specific activities. Directly before the congress activities were offered for 450 Early Career Researchers.
The proceedings give a comprehensive overview on the current state-of-the-art of the discussions on mathematics education and display the breadth and deepness of current research on mathematical teaching-and-learning processes.
The book introduces the major activities of ICME-13, namely articles from the four plenary lecturers and two plenary panels, articles from the five ICMI awardees, reports from six national presentations, three reports from the thematic afternoon devoted to specific features of ICME-13. Furthermore, the proceedings contain descriptions of the 54 Topic Study Groups, which formed the heart of the congress and reports from 29 Discussion Groups and 31 Workshops. The additional important activities of ICME-13, namely papers from the invited lecturers, will be presented in the second volume of the proceedings.