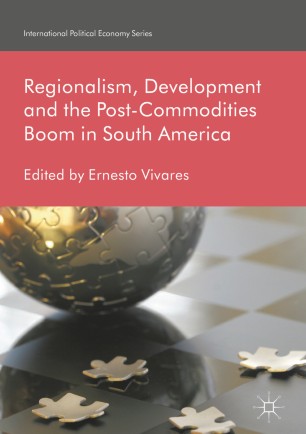 Regionalism, Development and the Post-Commodities Boom in South America

"This is a very important book, which integrates Latin American economic and international analysis with new approaches to understand the links between the changing international economy and unequal development in the region of Latin America. Rigorous, innovative and interesting."

"As one of the first systematic studies to look at the region in the aftermath of 2003–2012 commodities boom, this work stands out for its timeliness. At the same time, the volume reminds us how important Latin America has been, both empirically and theoretically, in defining IPE in the post-war era, providing an important historical dimension to today’s seemingly unprecedented circumstances. The result is a volume that is a must-read for those who are interested in the political economy of Latin America, as well as IPE more generally."

"Using an interdisciplinary approach, building on critical theory, combining national, regional and global lenses and collecting insights from first-class researchers from Europe and Latin America, this volume provides an innovative account of Latin America´s prospects and challenges in an unequal, unstable and changing world order. It is worth reading for researchers and students of international political economy, development and Latin American studies alike."

"The book contains different IPE frameworks for understanding the complex relationships between the international, regional and national contexts in terms of development, conflict and inequality in South America, a region that has been characterized by unequal and uneven structures of regional development and global insertion. Its strength lies in its multiple IPE lens to study the interplay between internal responses and adjustments and external constraints and transformations of South America's unequal development."

This book is a critical and multidisciplinary IPE of the unequal structures of South American development and uneven insertions in the global order following the decline of the commodities boom. The work explores the extent to which regional development issues are related to merely a decline of commodities´ prices and/or to the resilience of the historical structures within an unequal world order. Thus, the authors seek first to analytically explore the regional issues beyond the formal limitations of North American and Eurocentric approaches. Secondly, they empirically scrutinize the complex dimensions of regional inequality and global insertions. Aspects analysed include economic reprimarization, the impact of China, development finance, trade and regional value chains, knowledge and technology, regional and transnational organised crime, cities, economic integration and the Global South.

Ernesto Vivares is Professor at the Department of International Studies and Communication at the Facultad Latinoamericana de Ciencias Sociales Sede Ecuador (FLACSO), Ecuador. His research interests include the international political economy of development, inequality and conflict, the Latin American region and global order. Ernesto teaches in the fields of IPE, regionalism, globalization and methodological research. He previously edited Exploring the New South American Regionalism (NSAR) (2016).