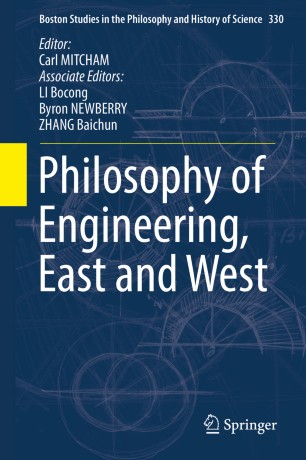 Philosophy of Engineering, East and West

Part of the Boston Studies in the Philosophy and History of Science book series (BSPS, volume 330)

This co-edited volume compares Chinese and Western experiences of engineering, technology, and development. In doing so, it builds a bridge between the East and West and advances a dialogue in the philosophy of engineering. Divided into three parts, the book starts with studies on epistemological and ontological issues, with a special focus on engineering design, creativity, management, feasibility, and sustainability. Part II considers relationships between the history and philosophy of engineering, and includes a general argument for the necessity of dialogue between history and philosophy. It continues with a general introduction to traditional Chinese attitudes toward engineering and technology, and philosophical case studies of the Chinese steel industry, railroads, and cybernetics in the Soviet Union. Part III focuses on engineering, ethics, and society, with chapters on engineering education and practice in China and the West. The book’s analyses of the interactions of science, engineering, ethics, politics, and policy in different societal contexts are of special interest. The volume as a whole marks a new stage in the emergence of the philosophy of engineering as a new regionalization of philosophy. This carefully edited interdisciplinary volume grew out of an international conference on the philosophy of engineering hosted by the University of the Chinese Academy of Sciences in Beijing. It includes 30 contributions by leading philosophers, social scientists, and engineers from Australia, China, Europe, and the United States.