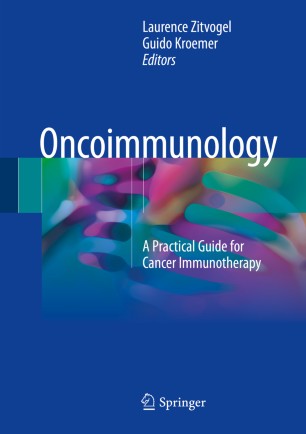 A Practical Guide for Cancer Immunotherapy

In this book, leading experts in cancer immunotherapy join forces to provide a comprehensive guide that sets out the main principles of oncoimmunology and examines the latest advances and their implications for clinical practice, focusing in particular on drugs with FDA/EMA approvals and breakthrough status. The aim is to deliver a landmark educational tool that will serve as the definitive reference for MD and PhD students while also meeting the needs of established researchers and healthcare professionals.

Immunotherapy-based approaches are now inducing long-lasting clinical responses across multiple histological types of neoplasia, in previously difficult-to-treat metastatic cancers. The future challenges for oncologists are to understand and exploit the cellular and molecular components of complex immune networks, to optimize combinatorial regimens, to avoid immune-related side effects, and to plan immunomonitoring studies for biomarker discovery. The editors hope that this book will guide future and established health professionals toward the effective application of cancer immunology and immunotherapy and contribute significantly to further progress in the field.

Laurence Zitvogel, MD, PhD (Tumor Immunology), PU-PH Faculty Paris Sud, University Paris XI (Clinical Biology), graduated in Medical Oncology from the School of Medicine of the University of Paris in 1992. Dr. Zitvogel started her scientific career at the University of Pittsburgh in Michael Lotze’s laboratory. She subsequently became Research Director at Institut National de la Santé et Recherche Médicale U1015 and is currently Professor of Immunology/Biology at the University of Paris Medical School and Scientific Director of the Immuno-Oncology programme at Institut Gustave Roussy (Villejuif, France), the largest cancer center in Europe. She has made very important contributions to the field of cancer immunology and immunotherapy and has brought together basic and translational research, including the design of cancer therapies, through combined animal studies and phase I/II patient trials. She pioneered the concept of immunogenic cell death and her team discovered the critical role and impact of gut microbiota in cancer immunosurveillance and therapies. She has received many awards, including the INSERM Prize for Translational Research and The Charles Rodolphe Brupbacher Prize for Cancer Research 2017.

Guido Kroemer obtained his MD in 1985 from the University of Innsbruck (Austria) and his PhD in molecular biology in 1992 from the Autonomous University of Madrid (Spain). He is currently a professor at the Faculty of Medicine of the University of Paris Descartes/Paris V, Director of the INSERM Unit “Apoptosis, Cancer and Immunity”, Director of the Metabolomics and Cell Biology platforms of the Gustave Roussy Cancer Campus (Villejuif-Grand Paris), and a practitioner at the Hôpital Européen Georges-Pompidou in Paris. He is also Director of the Paris Alliance of Cancer Research Institutes (PACRI) and the LabEx “Immuno-Oncology”. He is best known for the discoveries that mitochondrial membrane permeabilization constitutes a decisive step in regulated cell death; that autophagy is a cytoprotective mechanism with lifespan-extending effects; and that anticancer therapies are successful only if they stimulate tumor-targeting immune responses. He has received a number of awards, including the Descartes Prize of the European Union, the Dautrebande Prize (Belgian Royal Academy of Medicine), the Léopold Griffuel Prize (French Association for Cancer Research), and The 2017 Charles Rodolphe Brupbacher Prize for Cancer Research.

“This is an excellent book on a topic that currently represents a major therapeutic approach in oncology. Written by leading experts, the book is truly an invaluable resource for anyone interested in understanding how immunology and oncology interface.” (Ravi Salgia, Doody's Book Reviews, July, 2018)
Buy options