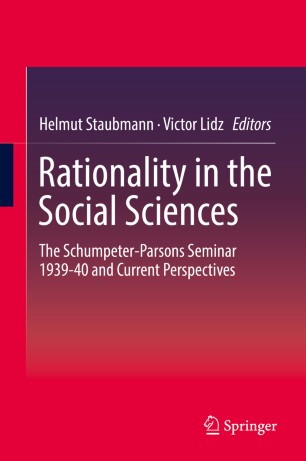 Rationality in the Social Sciences

The Schumpeter-Parsons Seminar 1939-40 and Current Perspectives

This volume presents for the first time a collection of historically important papers written on the concept of rationality in the social sciences. In 1939-40, the famed Austrian economist Joseph A. Schumpeter and the famous sociologist Talcott Parsons convened a faculty seminar at Harvard University on the topic of rationality.

The first part includes their essays as well as papers by the Austrian phenomenologist Alfred Schütz, the sociologist Wilbert Moore, and the economist Rainer Schickele. Several younger economists and sociologists with bright futures also participated, including Alex Gerschenkron, John Dunlop, Paul M. Sweezy, and Wassily W. Leontief, who was later awarded the Nobel Prize for developing input-output analysis. The second part presents essays and commentaries written by today’s internationally noted social scientists and addressing the topic of rationality in social action from a broad range of perspectives. The book’s third and final part shares the recently discovered correspondence between the seminar principals regarding the original but failed plan to publish its proceedings. It also includes letters, not previously published, between Richard Grathoff, Walter M. Sprondel and Talcott Parsons on the rationality seminar and the exchanges between Parsons and Schütz.

Helmut Staubmann is professor for social theory and cultural sociology and dean of the School of Political Science and Sociology at the University of Innsbruck, Austria. He has authored and edited several books on action theory in the Parsonian tradition. Together with Victor M. Lidz he is editor of the book series Studies in the Theory of Action.

Victor M. Lidz was a student and later collaborator of the late Talcott Parsons who has published contributions to the theory of action developed by Parsons for 45 years. He has held faculty positions at the university of Chicago, the University of Pennsylvania, and the Drexel University College of Medicine (and predecessor institution) in the Department of Psychiatry from which he is now Professor emeritus.