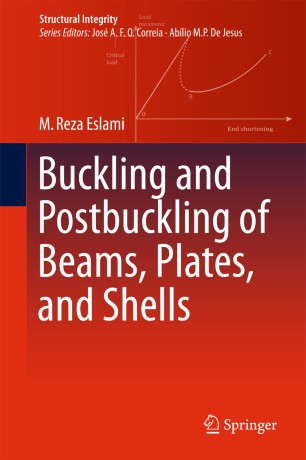 Buckling and Postbuckling of Beams, Plates, and Shells

This book contains eight chapters treating the stability of all major areas of the flexural theory. It covers the stability of structures under mechanical and thermal loads and all areas of structural, loading and material types. The structural element may be assumed to be made of a homogeneous/isotropic material, or of a functionally graded material. Structures may experience the bifurcation phenomenon, or they may follow the postbuckling path. This volume explains all these aspects in detail.

The book is self-contained and the necessary mathematical concepts and numerical methods are presented in such a way that the reader may easily follow the topics based on these basic tools. It is intended for people working or interested in areas of structural stability under mechanical and/or thermal loads. Some basic knowledge in classical mechanics and theory of elasticity is required.

Dr. Eslami was a member of ASME and AIAA since 1974, where in 1997 he became Associate Fellow of AIAA and in 2001 a Fellow of ASME. He is a Fellow of Iran Academy of Sciences, the recipient of the UNESCO EINSTEIN Medal For Basic Sciences in 2008, and Honorable Doctor, Odlar Yurdu University, Azerbaijan, Sept. 22, 2011. He was selected as Distinguished Professor by AUT in 1991, 1997, 2002, and National Distinguished Professor by the ISME in 1996. Also, he received the ASME-ESDA Award Plaques in 1994, 1996, 1998, and 2000. The recognition of Nationally Distinguished Researcher (2002) and Nationally Distinguished Professor (2003) was awarded to him by the Ministry of Higher Education. He was honored as the Eternity Figure by the IRIB in 2003. His name appeared in the MARQUIS Who's who; Who's who in Engineering and Science in 1992 and Who's who in the World in 1998.

Dr. Eslami is the Editor-in-Chief, Transactions of Iranian Society of Mech. Eng.

(ISME) a member in the Board of Editor, Journal of Thermal Stresses. In addition, he is among the Editorial board of a number of other national and international journals and a reviewer of over 25 dierent Journals, such as ASME, AIAA, IJMS, IJSS, ZAMM, Nature, Acta Mecanica, Composite St., IMechE. Trans., Comp. Part B., and etc. He established the graduate program in ME Dept. of AUT in the fall of 1973 and taught some 10 undergraduate and 11 graduate courses and 4 Professional courses (ASME PVP and Piping Codes) during his last 44 years of teaching. He has published over 480 papers, Editor and Co-Editor of 4 ASME-ESDA Conference proceedings (1994, 1996), and a number of graduate books.