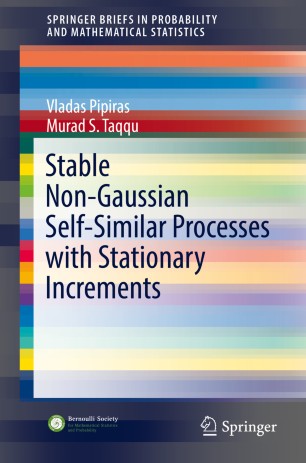 This book provides a self-contained presentation on the structure of a large class of stable processes, known as self-similar mixed moving averages.  The authors present a way to describe and classify these processes by relating them to so-called deterministic flows.  The first sections in the book review random variables, stochastic processes, and integrals, moving on to rigidity and flows, and finally ending with mixed moving averages and self-similarity.  In-depth appendices are also included.

This book is aimed at graduate students and researchers working in probability theory and statistics.

Vladas Pipiras is Professor of Statistics and Operations Research at the University of North Carolina, Chapel Hill. His main research interests focus on stochastic processes exhibiting long-range dependence, self-similarity and other scaling phenomena, as well as on stable, extreme-value and other distributions possessing heavy tails. His other current interests include high-dimensional time series, sampling issues for “big data” and stochastic dynamical systems, with applications in Econometrics, Neuroscience, Engineering, Computer Science and other areas. Vladas Pipiras has written over 50 research papers, and is a coauthor of a graduate textbook on measure theory and probability.

Murad S. Taqqu’s  research involves self-similar processes, their connection to time series with long-range dependence , the development of statistical tests, and the study of non-Gaussian processes whose marginal distributions have heavy tails.  He has written more than 250 scientific papers and is the coauthor of a standard reference on stable non-Gaussian random processes. Professor Taqqu is a Fellow of the Institute of Mathematical Statistics and has been elected Member of the International Statistical Institute.  He has received a number of awards, including a John Simon Guggenheim Fellowship, the 1995 William J. Bennett Award, the 1996 IEEE W.R.G. Baker Prize, the 2002 EURASIO Best Paper Award and the  2006 ACM/SIGCOMM Test of Time Award.