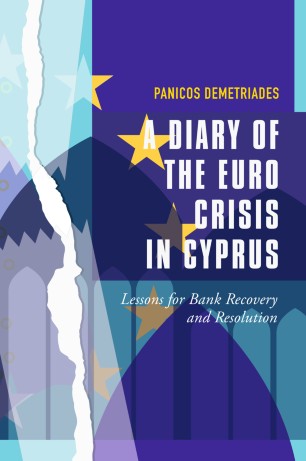 A Diary of the Euro Crisis in Cyprus

Lessons for Bank Recovery and Resolution

This book tells the story of the euro crisis in Cyprus from the inside. Written by the former Governor of the Central Bank of Cyprus, Panicos Demetriades, who was in office during this turbulent period, this book shows how the crisis unravelled through a series of key events that occurred during his tenure.

Written in chronological order, and broadly based on the author’s personal diary, starting from his first day in office, this volume brings together economics, banking, regulation, governance, history, politics and international relations.

Presenting personal witness statements, including records of noteworthy telephone conversations, informal meetings and other milestones, it examines crucial questions like: How did Cyprus become so systemically important to the rest of the euro area? Why was Cyprus treated so differently in comparison to other peripheral countries in Europe? Why were bank depositors targeted? What role did Cyprus’ links with Russia play in the design of the programme? What has been the toxic fallout from the bail-in? Are there any longer-term implications for the euro?  What are the lessons for regulators around the world?

The book will appeal to readers interested in financial crises, the euro’s architecture, the evolution of the European Monetary Union, and those with an interest in how Europe and the IMF dealt with crises in peripheral European countries.

Panicos Demetriades served as Governor of the Central Bank of Cyprus and was a member of the Governing Council of the European Central Bank from May 2012 until stepping down from the governorship in Cyprus in April 2014, a move that The Economist described as ‘a blow to central bank independence’. He returned to his academic position in the UK as Professor of Financial Economics at the University of Leicester shortly after.  Professor Demetriades continues to speak regularly around the world on his experience as Governor of the Central Bank of Cyprus during one of Europe’s worst financial crises. He holds a PhD in Economics from the University of Cambridge, UK, and BA and MA degrees, also in Economics, from the University of Essex, UK. His academic career spans a period of 25 years, the last 15 of which have been with the University of Leicester. He has published extensively in academic journals and books, primarily in the area of financial development. According to RePec (Research Papers in Economics) he is among the most widely read economics authors in the world. He has also published in ‘popular’ and specialist media, such as VOX-EU and The Financial Times. He is frequently a guest on TV and radio programmes worldwide in relation to the euro crisis, Brexit and other economic issues.  Professor Demetriades is a Fellow of the Academy of Social Sciences of the United Kingdom.

“Cyprus is a small country with a big story: its 2013 banking crisis constituted a major episode in the larger Eurozone crisis. As central bank governor, Panicos Demetriades was at the epicentre of events. He tells the story of the crisis and political constraints on its resolution with verve and drama. Essential reading for crisis mavens.” (Barry Eichengreen, George C. Pardee and Helen N. Pardee Professor of Economics and Political Science, University of California, Berkeley, USA)

“The banking crisis that erupted in Cyprus in 2013 shook the Eurozone and led to a drama with many ramifications. As the Governor of the Central Bank of Cyprus, Panicos Demetriades was both an actor and an observer of the unfolding drama. Nobody is better placed to tell us the gripping story of the Cypriot banking crisis.” (Paul De-Grauwe, Professor, European Institute, London School of Economics, UK)

“A fascinating book—very well written and full of unique insights. It reads like an economic thriller.” (Peter Bofinger, Professor of Economics, Money and International Economic Relations, University of Würzburg, Germany, and Member of the German Council of Economic Experts)

“We have Greece to thank for bail-outs, but Cyprus to thank for bail-ins.  Demetriades weaves together history, politics, economics and finance to explain how his country was plunged into crisis and how he tried to help steer it back out. It is the story of a tiny island, but also of the dawn of banking union in the Eurozone. A must read for anyone who has an interest in where Europe goes from here.” (Megan Greene, Managing Director and Chief Economist, Manulife Asset Management)

“The Cyprus banking crisis shook the country and was a major after-shock in the Eurozone crisis. The story of its crisis management as an interplay of politics and economics needs to be told. As the former Governor's account, this book is at the same time a most intense political thriller and an insightful economic analysis.” (Olli Rehn, former European Commissioner for Economic and Monetary Affairs, 2010-14)

“This book should be on every reading list to train future generations of monetary economists and Central Bankers.  It is also a ‘must read’ for anyone interested in the euro-crisis of 2012-13 particularly, and in European recent political history more broadly.  But beyond all that, it is a vivid and dramatic story.” (Charles A.E. Goodhart, CBE, FBA, Emeritus Professor of Banking and Finance, London School of Economics)