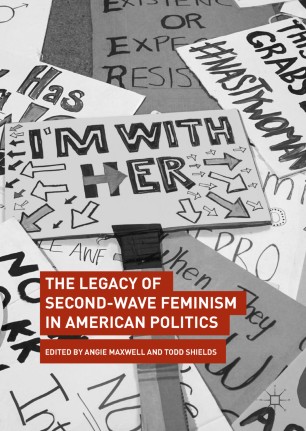 The Legacy of Second-Wave Feminism in American Politics

This book chronicles the influence of second wave feminism on everything from electoral politics to LGBTQ rights. The original descriptions of second wave feminism focused on elite, white voices, obscuring the accomplishments of many activists, as third wave feminists rightly criticized.  Those limited narratives also prematurely marked the end of the movement, imposing an imaginary timeline on what is a continuous struggle for women’s rights. Within the chapters of this volume, scholars provide a more complex description of second wave feminism, in which the sustained efforts of women from many races, classes, sexual orientations, and religious traditions, in the fight for equality have had a long-term impact on American politics. These authors argue that even the “Second Wave” metaphor is incomplete, and should be replaced by a broader, more-inclusive metaphor that accurately depicts the overlapping and extended battle waged by women activists. With the gift of hindsight and the awareness of the limitations of and backlash to this “Second Wave,” the time is right to reflect on the feminist cause in America and to chart its path forward.

Angie Maxwell is the Director of the Diane Blair Center of Southern Politics and Society and Associate Professor of Political Science at the University of Arkansas, USA. Her research focuses on identity politics.
Todd Shields is Professor of Political Science and Dean of the J. William Fulbright College of Arts and Sciences at the University of Arkansas, USA. His research focuses on campaigns, elections, and political psychology.