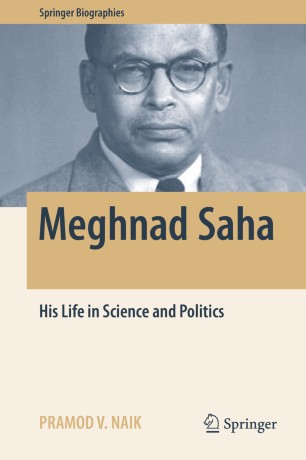 His Life in Science and Politics

This biography is a short yet comprehensive overview of the life of Meghnad Saha, the mastermind behind the frequently used Saha equations and a strong contributor to the foundation of science in India. The author explores the lesser known details behind the man who played a major role in building scientific institutions in India, developed the breakthrough theory of thermal ionization, and whose fervor about India’s rapid progress in science and technology, along with concern for uplifting his countrymen and optimizing resources, led him to eventually enter politics and identify the mismanagement of many programs of national importance to Parliament.

This book is free of most academic technicalities, so that the reader with general scientific knowledge can read and understand it easily. One interested only in Saha’s contribution to physics can pick up just that part and read it. Conversely, the average reader may skip the technical chapters, and read the book without loss of continuity or generality to still get a coherent picture. This work touches on all aspects of Saha’s multidimensional personality, which overflows in the pages of his periodical, Science and Culture,as well as his many speeches, debates and discussions in Parliament, all of which is appropriately conveyed in this book.

Dr. Pramod Naik received his PhD in Physics from the University of Bombay in 1993, focusing on studies in wave-particle interactions. He then worked as a visiting lecturer for an army officers training program in petroleum management on behalf of the Indian Oil Corporation in Mumbai. Dr. Naik is currently a lecturer in physics at the Veermata Jijabai Technological Institute in Mumbai, India. He is also on the Board of Studies in Physics at Shreemati Nathibai Damodar Thackersey Woman’s University in Mumbai. He has published in various journals, including Astrophysics and Space Science. Dr. Naik has written four other books on physics and/or engineering, published by Narosa Publishing House, PHI Learning, Pearson, and Viva Books. He is a member of the AGU, Institute of Physics, Plasma Science Society of India and the Indian Physics Association.