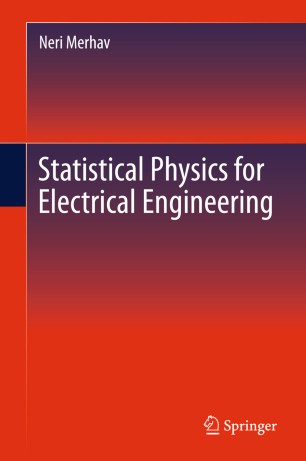 The main body of this book is devoted to statistical physics, whereas much less emphasis is given to thermodynamics. In particular, the idea is to present the most important outcomes of thermodynamics – most notably, the laws of thermodynamics – as conclusions from derivations in statistical physics.
Special emphasis is on subjects that are vital to engineering education. These include, first of all, quantum statistics, like the Fermi-Dirac distribution, as well as diffusion processes, both of which are fundamental to a sound understanding of semiconductor devices. Another important issue for electrical engineering students is understanding of the mechanisms of noise generation and stochastic dynamics in physical systems, most notably in electric circuitry. Accordingly, the fluctuation-dissipation theorem of statistical mechanics, which is the theoretical basis for understanding thermal noise processes in systems, is presented from a signals-and-systems point of view, in a way that is readily accessible for engineering students and in relation with other courses in the electrical engineering curriculum, like courses on random processes.

Neri Merhav received the B.Sc., M.Sc., and D.Sc. degrees from the Technion, Israel Institute of Technology, in 1982, 1985, and 1988, respectively, all in electrical engineering. Since 1990 he has been a faculty member (and since 1998 a full professor) in the Electrical Engineering Department of the Technion, Haifa, Israel. His research interests include information theory, statistical communications, statistical signal processing, and in recent years, also the relationships between information theory and statistical physics. He has authored and coauthored approximately 180 journal articles and a similar number of conference articles, as well as a few tutorial papers and two monographs. During the years 1996--1999, and also since 2017, he has served as an associate editor for the IEEE Transactions on Information Theory.

Dr. Merhav was a co-recipient of the 1993 Best Paper Award of the IEEE Information Theory Society, as well as a few similar awards on conference papers. He received the 1994 American Technion Society Award for Academic Excellence and the 2002 Technion Henry Taub Prize for Excellence in Research. He is a Fellow of the IEEE since 1999.