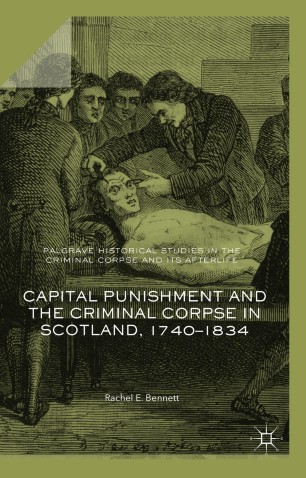 Capital Punishment and the Criminal Corpse in Scotland, 1740–1834

This book is open access under a CC BY 4.0 license.
This book provides the most in-depth study of capital punishment in Scotland between the mid-eighteenth and early nineteenth century to date. Based upon an extensive gathering and analysis of previously untapped resources, it takes the reader on a journey from the courtrooms of Scotland to the theatre of the gallows. It introduces them to several of the malefactors who faced the hangman’s noose and explores the traditional hallmarks of the spectacle of the scaffold. It demonstrates that the period between 1740 and 1834 was one of discussion, debate and fundamental change in the use of the death sentence and how it was staged in practice. In addition, the study provides an innovative investigation of the post-mortem punishment of the criminal corpse. It offers the reader an insight into the scene at the foot of the gibbets from which criminal bodies were displayed, and around the dissection tables of Scotland’s main universities where criminal bodies were used as cadavers for anatomical demonstration. In doing so it reveals an intermediate stage in the long-term disappearance of public bodily punishment.

Rachel E. Bennett is Research Fellow at the University of Warwick, UK. Her research interests include various aspects of Britain’s criminal history including capital punishment and the post-mortem punishment of the criminal body, the intersections of medicine and the criminal justice system and medical care in women’s prisons.