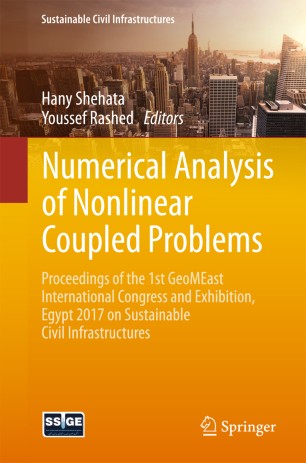 This volume deals with numerical simulation of coupled problems in soil mechanics and foundations. It contains analysis of both shallow and deep foundations. Several nonlinear problems are considered including, soil plasticity, cracking, reaching the soil bearing capacity, creep, etc. Dynamic analysis together with stability analysis are also included. Several numerical models of dams are considered together with coupled problems in soil mechanics and foundations. It gives wide range of modelling soil in different parts of the world. This volume is part of the proceedings of the 1st GeoMEast International Congress and Exhibition on Sustainable Civil Infrastructures, Egypt 2017.

Hany Farouk Shehata
Shehata is the founder and CEO of the Soil-Structure Interaction Group in Egypt “SSIGE.” He is a partner and vice-president of EHE-Consulting Group in the Middle East, and managing editor of the “Innovative Infrastructure Solutions” journal, published by Springer. He worked in the field of civil engineering early, while studying, with Bechtel Egypt Contracting & PM Company, LLC. His professional experience includes working in culverts, small tunnels, pipe installation, earth reinforcement, soil stabilization, and small bridges. He also has been involved in teaching, research, and consulting. His areas of specialization include static and dynamic soil-structure interactions involving buildings, roads, water structures, retaining walls, earth reinforcement, and bridges, as well as, different disciplines of project management and contract administration. He is the author of an Arabic practical book titled “Practical Solutions for Different Geotechnical Works: The Practical Engineers’ Guidelines.” He is currently working on a new book titled “Soil-Foundation-Superstructure Interaction: Structural Integration”. He is the contributor of more than 50 publications in national and international conferences and journals. He served as a co-chair of the GeoChina 2016 International Conference in Shandong, China. He serves also as a co-chair and secretary general of the GeoMEast 2017 International Conference in Sharm El-Sheikh, Egypt. 2016 Outstanding reviewer of the ASCE as selected by the Editorial Board of International Journal of Geomechanics.
Prof Rashed,
Graduated from Cairo University at 1990; obtained PhD in 1997 from the University of Wales, UK. Prof Rashed is mainly interested in applications of the boundary element method in structural and geotechnical engineering. He is now full professor at Cairo University and the Deputy Secretary General for the Supreme Council of Universities in Egypt. Prof Rashed is the main developer of the PLPAK software package which employs the boundary element method in the analysis of buildings and structural foundations (www.be4e.com).