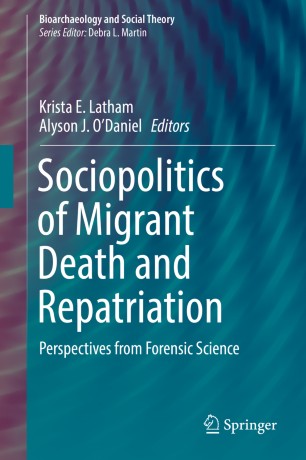 Sociopolitics of Migrant Death and Repatriation

As scholars have by now long contended, global neoliberalism and the violence associated with state restructuring provide key frameworks for understanding flows of people across national boundaries and, eventually, into the treacherous terrains of the United States borderlands. The proposed volume builds on this tradition of situating migration and migrant death within broad, systems-level frameworks of analysis, but contends that there is another, perhaps somewhat less tidy, but no less important sociopolitical story to be told here.

Through examination of how forensic scientists define, navigate, and enact their work at the frontiers of US policy and economics, this book joins a robust body of literature dedicated to bridging social theory with bioarchaeological applications to modern day problems.

This volume is based on deeply and critically reflective analyses, submitted by individual scholars, wherein they navigate and position themselves as social actors embedded within and, perhaps partially constituted by, relations of power, cultural ideologies, and the social structures characterizing this moment in history.

Each contribution addresses a different variation on themes of power relations, production of knowledge, and reflexivity in practice. In sum, however, the chapters of this book trace relationships between institutions, entities, and individuals comprising the landscapes of migrant death and repatriation and considers their articulation with sociopolitical dynamics of the neoliberal state.

Dr. Krista Erin Latham is an Associate Professor of Biology and Anthropology at the University of Indianapolis, where she has taught since 2007.  She is also the Director of the University of Indianapolis Human Identification Center.  She received her B.S. in Biology and Chemistry from the University of North Texas in 2000, her M.S. in Human Biology from the University of Indianapolis in 2003, and her M.A. and Ph.D. in Anthropology from Temple University in 2006 and 2008.  Dr. Latham is a Board Certified Forensic Anthropologist (D-ABFA) and a Fellow of the American Academy of Forensic Sciences. Her research investigates different aspects of human biological variation, skeletal biology, population genetics and skeletal DNA and she has produced numerous scientific publications.  She currently serves as a Consulting Forensic Anthropologist for police, coroners, and pathologists in the Midwestern U.S. and has delivered numerous lectures for state and local agencies around the country.  Dr. Latham also serves as a DNA Expert in the U.S. Federal Court System.
Dr. Alyson O’Daniel is is an Assistant Professor of Medical and Cultural Anthropology at the University of Indianapolis in Indianapolis, Indiana. Her scholarship and teaching explore intersections of state power, policy, and practice, social and bodily vulnerability, and health care inequality in United States. She has worked for fourteen years on discerning racial, class, and gendered dimensions of HIV-related health inequalities, and the relationships between federal public health care policy and the structure and content of local initiatives for the health care and support of HIV-positive women. During this time, she has conducted extensive ethnographic research among HIV-positive women and their service providers in Denver, Colorado, “Midway,” North Carolina, and Indianapolis, Indiana. Her HIV/AIDS related work has been published in journals such as Medical Anthropology, Human Organization, and Transforming Anthropology. Her recent book-length ethnography, Holding On: African American Women Surviving HIV/AIDS, was published by University of Nebraska Press in 2016. More recently, Dr. O’Daniel’s research program has expanded to include examining response to the migrant death crisis in South Texas.  In partnership with the humanitarian forensic science team from the University of Indianapolis, the project explores volunteer forensic science as a crucial, yet politically-fraught part of the human migration story.