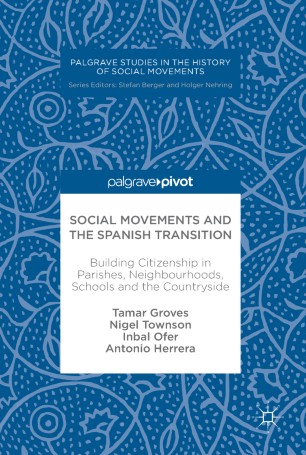 Social Movements and the Spanish Transition

Building Citizenship in Parishes, Neighbourhoods, Schools and the Countryside

This book explores the role of popular forms of social mobilization during Spain's process of transition to democracy. It focuses on the nature of citizenship that was forged during the period of conflict and mobilisation that characterised Spain from the late 1950s until the late 1980s. It offers a two-pronged exploration of social movements at the time.  On the one hand, it provides a detailed analysis of four very different cases of social mobilisation: among Catholics, residents, farmers and teachers. It discerns processes of organisation, repertoires of action, collective meaning, and interactions with communities and local political actors. On the other hand, it reflects on how the fight over specific issues and the use of similar tactics generated shared interpretations of what it meant to be a citizen in a democracy.

Nigel Townson is Senior Lecturer at the Complutense University of Madrid, Spain.

Inbal Ofer is Senior Lecturer in Modern European History at the Open University of Israel, Israel.

“Julia Preece’s book is an exciting and very important book for the community engagement field—not just in South Africa and the global south where many of her case studies are located, but for the field more broadly too. … this is an excellent book and an essential read for SL and CE practitioners and students in both the global South and North.” (Janice McMillan, International Journal of Lifelong Education, Vol. 37 (6), 2018)​
Buy options