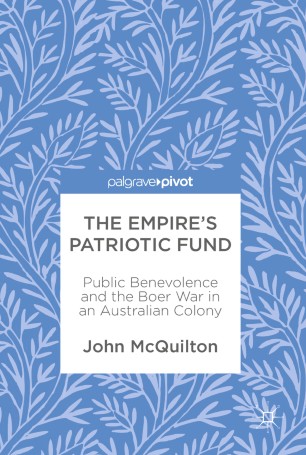 Public Benevolence and the Boer War in an Australian Colony

This book examines the Empire’s Patriotic Fund, established in Victoria, Australia, in 1901 to assist the dependants of the men serving war in the Boer War and the men invalided home because of wounds or illness. Acting as an autonomous body and drawing on funds raised through a public appeal, its work marked one of the first attempts in Australia to deal with the consequences of Australian participation in a sustained war. This is the first full study of an Australian fund established to support those affected by a sustained war being fought for Empire by Australians. Rather than casting those affected by war as victims, John McQuilton examines how a body of middle class men attempted to come to grips with an experience that lay outside prevailing notions of social welfare. Based on applications submitted to the Empire’s Patriotic Fund where both class and gender played their roles, this book opens up further study of such funds and the question of antecedents in the history of repatriation in Australia in the early twentieth century.

John McQuilton is Associate Professor and Principal Honorary Fellow in History at the University of Wollongong, Australia. His most recent book, Australia’s Communities and the Boer War (Palgrave, 2016), examined the impact of the Boer War on a regional community.