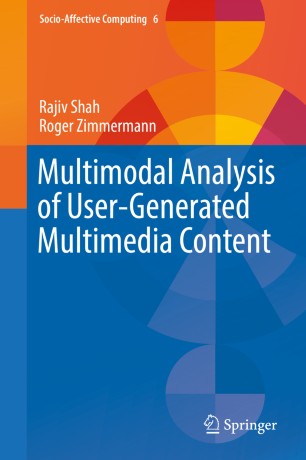 This book presents a study of semantics and sentics understanding derived from user-generated multimodal content (UGC). It enables researchers to learn about the ways multimodal analysis of UGC can augment semantics and sentics understanding and it helps in addressing several multimedia analytics problems from social media such as event detection and summarization, tag recommendation and ranking, soundtrack recommendation, lecture video segmentation, and news video uploading.

Readers will discover how the derived knowledge structures from multimodal information are beneficial for efficient multimedia search, retrieval, and recommendation. However, real-world UGC is complex, and extracting the semantics and sentics from only multimedia content is very difficult because suitable concepts may be exhibited in different representations. Moreover, due to the increasing popularity of social media websites and advancements in technology, it is now possible to collect a significant amount of important contextual information (e.g., spatial, temporal, and preferential information). Thus, there is a need to analyze the information of UGC from multiple modalities to address these problems.

A discussion of multimodal analysis is presented followed by studies on how multimodal information is exploited to address problems that have a significant impact on different areas of society (e.g., entertainment, education, and journalism). Specifically, the methods presented exploit the multimedia content (e.g., visual content) and associated contextual information (e.g., geo-, temporal, and other sensory data). The reader is introduced to several knowledge bases and fusion techniques to address these problems.

This work includes future directions for several interesting multimedia analytics problems that have the potential to significantly impact society. The work is aimed at researchers in the multimedia field who would like to pursue research in the area of multimodal analysis of UGC.

Rajiv Ratn Shah received his B.Sc. with honors in Mathematics from Banaras Hindu University, India in 2005. He received his M.Tech. in Computer Technology and Applications from Delhi Technological University, India in 2010. Prior joining Indraprastha Institute of Information Technology Delhi (IIIT Delhi), India as an assistant professor, Dr Shah has received his Ph.D. in Computer Science from the National University of Singapore, Singapore. Currently, he is also working as a research fellow in living analytics research centre (LARC) at the Singapore Management University, Singapore. His research interests include the multimodal analysis of user-generated multimedia content in the support of social media applications, multimodal event detection and recommendation, and multimedia analysis, search, and retrieval. Dr Shah is the recipient of several awards, including the runner-up in the Grand Challenge competition of ACM International Conference on Multimedia. He is involved in reviewing of many top-tier international conferences and journals. He has published several research work in top-tier conferences and journals such as Springer MultiMedia Modeling, ACM International Conference on Multimedia, IEEE International Symposium on Multimedia, and Elsevier Knowledge-Based Systems.