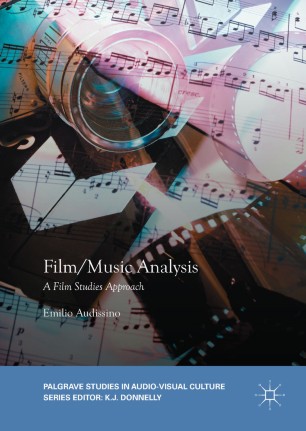 This book offers an approach to film music in which music and visuals are seen as equal players in the game. The field of Film-Music Studies has been increasingly dominated by musicologists and this book  brings the discipline back squarely into the domain of of Film Studies. Blending Neoformalism with Gestalt Psychology and Leonard B. Meyer's musicology, this study treats music as a cinematic element and offers scholars and students of both music and film a set of tools to help them analyse the wide ranging impact that music has in films.

Dr Emilio Audissino is a film historian and film musicologist based at the University of Southampton, UK. He has published widely on the topic of film music and is the author of John Williams's Film Music: Jaws, Star Wars, Raiders of the Lost Ark and the Return of the Classical Hollywood Music Style (2014).

“In this compelling analysis of how film music functions in a wide variety of contexts, Audissino illustrates his clearly explained theoretical concepts with numerous well-chosen examples and substantial case studies. Approaching its subject primarily (and refreshingly) from a film-studies perspective, this book will equally prove an immensely useful and thought-provoking resource for anyone interested in music and cinema.” (Mervyn Cooke, Professor of Music at University of Nottingham, UK, and author of A History of Film Music, 2008)

“Thirty years ago, Claudia Gorbman pioneered placing film music within regular film theory. Now it once again seems necessary to apply a theoretical frame which allows music to be treated as a cinematic device and not as autonomous music. Here Emilio Audissino couples neoformalism and Meyer’s musicology into an analytical tool that highlights the interplay between film and music. This book is indispensable for every scholar who wants to analyze and understand film music.” (Ann-Kristin Wallengren, Professor in Film Studies, Lund University, Sweden, and co-editor (with K.J. Donnelly) of Today’s Sounds for Yesterday’s Films: Making Music for Silent Cinema, 2016)