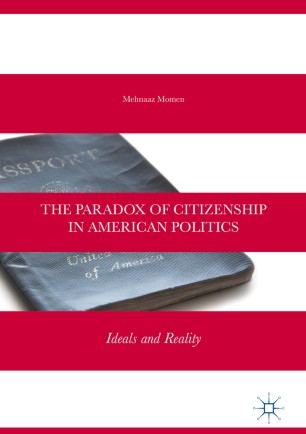 The Paradox of Citizenship in American Politics

This book is an exploration of American citizenship, emphasizing the paradoxes that are contained, normalized, and strengthened by the gaps existing between proposed policies and real-life practices in multiple arenas of a citizen’s life. The book considers the evolution of citizenship through the journey of the American nation and its identity, its complexities of racial exclusion, its transformations in response to domestic demands and geopolitical challenges, its changing values captured in immigration policies and practices, and finally its dynamics in terms of the shift in state power vis-à-vis citizens. While it aspires to analyze the meaning of citizenship in America from the multiple perspectives of history, politics, and policy, it pays special attention to the critical junctures where rhetoric and reality clash, allowing for the production of certain paradoxes that define citizenship rights and shape political discourse.

Mehnaaz Momen is Associate Professor in the Department of Social Sciences at Texas A & M International University in Laredo, Texas, where she teaches courses in Political Science, Urban Studies, and Public Administration.

“On the whole, the book is engagingly written and has much to commend it.” (Peter Kivisto, Journal of Citizenship and Globalisation Studies, Vol. 2(1), 2018)​
Buy options