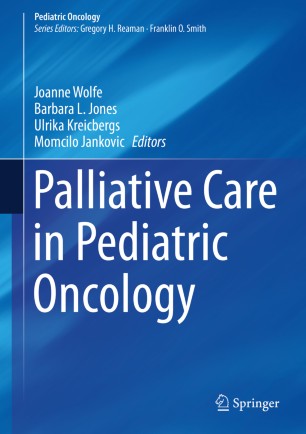 This textbook is the first to focus on comprehensive interdisciplinary care approaches aimed at enhancing the wellbeing of children with cancer and their families throughout the illness experience. Among the topics addressed are the epidemiology of pediatric cancer distress, including physical, emotional, social, and spiritual dimensions; the role of the interdisciplinary team; communication and advance care planning; symptom prevention and management; care at the end of life; family bereavement care; and approaches to ease clinician distress.  The contributing authors are true experts and provide guidance based on the highest available level of evidence in the field. The book has not only an interdisciplinary but also an international perspective; it will appeal globally to all clinicians caring for children with cancer, including physicians, nurses, psychosocial clinicians, and chaplains, among others.

Joanne Wolfe, MD MPH is the Chief of the Division of Pediatric Palliative Care in the Department of Psychosocial Oncology and Palliative Care at the Dana-Farber Cancer Institute (DFCI) and the Director of Palliative Care at Boston Children’s Hospital (BCH), and is an Associate Professor of Pediatrics at Harvard Medical School.  The Pediatric Advanced Care Team (PACT), the palliative care service which she directs, received a 2001 Citation of Honor from the American Hospital Association’s Circle of Life Awards program for its innovative approach to caring for children with life-threatening illness. In 2013, Dr Wolfe was the recipient of the American Cancer Society’s Pathfinder in Palliative Care Award and in 2014 the Excellence in Scientific Research Award from the American Academy of Hospice and Palliative Medicine.

Barbara L. Jones, PhD, MSW, is the Associate Dean for Health Affairs and Professor at the University of Texas at Austin School of Social Work. She is the Co-Director of the Institute for Collaborative Health Research and Practice. Dr. Jones is a Distinguished Scholar and Fellow of the National Academies of Practice where she is also the Vice-Chair of the Social Work Academy. Dr. Jones is the 2014 recipient of the American Psychosocial Oncology Society (APOS) Outstanding Training and Education award. She is the Past President of the Association of Pediatric Oncology Social Workers (APOSW) and recipient of the 2013 APOSW Social Worker of the Year Award. She was a co-investigator on the ExCEL in Social Work, an NCI-funded project to train oncology social workers in psychosocial oncology.

Ulrika Kreicbergs, RN, PhD, holds a professorship in palliative care for children and youth at Ersta Sköndal Bräcke University College and is also affiliated to Karolinska Institutet, Stockholm, Sweden.  Her research on families with a child affected by cancer has been acknowledged worldwide. She received the Schweisguth Prize awarded by the International Society of Paediatric Oncology in 2004. Dr Kreicbergs did her postdoc at the Dana-Farber Cancer Institute and Boston Children’s Hospital in the US. Dr Kreicbergs has extended her research in paediatric palliative care so as to include also other incurable fatal conditions beyond cancer. Her work is primarily focused on factors in the health care that can be modified or avoided to reduce suffering and thereby enhance quality of life for the child and their families.

Momcilo Jankovic, M.D. is the Chairman of the Hemato-oncology Outpatient Clinic of the Pediatric clinic of the University of Milano-Bicocca placed at the Hospital san Gerardo in Monza (MB), Italy including the MBBM Foundation. He received the first Vittorio Ventafridda Award as Italian Pioneer of Pediatric Palliative care in 2007 and the Gold Ambrogino, the highest civic Award of Milano for his activity in the care and assistance of children affected by tumor or chronic diseases in 2010. He is active member in the pediatric section of the Italian Palliative Care Society. He is the responsible of the Home care Unit for children affected by tumors or other chronic diseases chairing a group of fellows and nurses devoted to this project. He contributed in promoting PPC in Italy as a teacher in different scientific Masters and school of professional training.