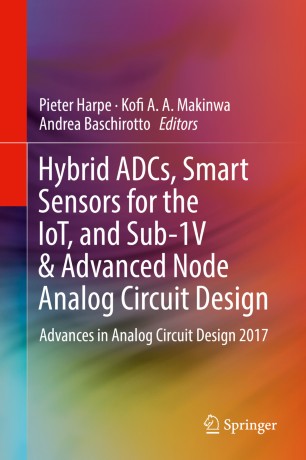 This book is based on the 18 tutorials presented during the 26th workshop on Advances in Analog Circuit Design. Expert designers present readers with information about a variety of topics at the frontier of analog circuit design, with specific contributions focusing on hybrid ADCs, smart sensors for the IoT, sub-1V and advanced-node analog circuit design. This book serves as a valuable reference to the state-of-the-art, for anyone involved in analog circuit research and development.

Pieter Harpe received the M.Sc. and Ph.D. degrees from the Eindhoven University of Technology, The Netherlands. From 2008 to 2011, he was a researcher at Holst Centre / imec, The Netherlands, where he worked on ultra low-power wireless transceivers, with a main focus on ADC research and design. In April 2011, he joined Eindhoven University of Technology as assistant professor on low-power mixed-signal circuits. Since 2012, he is co-organiser of the yearly workshop on Advances in Analog Circuit Design (AACD). In 2013, he became member of the Technical Program Committees of ISSCC and ESSCIRC. He is recipient of the ISSCC 2015 Distinguished Technical Paper Award and serves as an IEEE Solid-State Circuits Society Distinguished Lecturer. He contributed to over 100 scientific papers, 9 books and 7 patents. .

Kofi A. A. Makinwa received the B.Sc. and M.Sc. degrees from Obafemi Awolowo University, Nigeria in 1985 and 1988 respectively. In 1989, he received the M.E.E. degree from the Philips International Institute, The Netherlands and in 2004, the Ph.D. degree from Delft University of Technology, The Netherlands.From 1989 to 1999, he was a Research Scientist with Philips Research Laboratories, Eindhoven, The Netherlands, where he worked on interactive displays and digital recording systems. In 1999, he joined Delft University of Technology, where he is currently an Antoni van Leeuwenhoek Professor and Head of the Microelectronics Department. His main research interests are in the design of precision mixed-signal circuits, sigma-delta modulators, smart sensors and sensor interfaces. This has resulted in 12 books, 25 patents and over 200 technical papers. Kofi Makinwa is the Analog Subcommittee Chair of the International Solid-State Circuits Conference (ISSCC). He is also on the program committees of the VLSI Symposium, the European Solid-State Circuits Conference (ESSCIRC) and the Advances in Analog Circuit Design (AACD) workshop. He has been a guest editor of the Journal of Solid-State Circuits (JSSC) and a distinguished lecturer of the IEEE Solid-State Circuits Society. For his doctoral research, he was awarded the 2005 Simon Stevin Gezel Award from the Dutch Technology Foundation. He is a co-recipient of 14 best paper awards, from the JSSC, ISSCC, VLSI and Transducers, among others.  At the 60th anniversary of ISSCC he was recognized as a top-10 contributor. He is an IEEE Fellow, an alumnus of the Young Academy of the Royal Netherlands Academy of Arts and Sciences and an elected member of the IEEE Solid-State Circuits Society AdCom, the society's governing board.

Andrea Baschirotto (IEEE Fellow) is an Associate Professor at the Department of Physics, University of Milan-Bicocca, Italy, where he is the Director of the Microelectronics Group. His main research interests are in the design of CMOS mixed analog/digital integrated circuits, in particular for low-power and/or high-speed signal processing. He is/has been responsible of several National, Regional, and industrial projects for the design of ASIC. In 2010 he co-founded the start-up sparklingIC, of which he serves as CTO. Andrea Baschirotto has a long-term experience in microelectronics for teaching, researching, and industrial designing. He is teaching regular Academic courses since 1997. He uses to give advanced courses in companies and research center since 1996. He uses to give short courses&tutorial at the most important conferences (ISSCC, ISCAS, PRIME). He has authored or co-authored more than 190 papers in international journals and presentations at international conferences, 6 book chapters, and holds 40 USA patents. In addition, he has co-authored more than 120 papers within research collaborations on high-energy physics experiments. Andrea Baschirotto has been awarded of the ESSCIRC2006 Best Paper Award and of the ESSCIRC2015 Best Student Paper Award. He has been Associate Editor IEEE Trans. Circuits Syst. – Part II, and of IEEE Trans. Circuits Syst. – Part I. He has been the Technical Program Committee Chairman for ESSCIRC 2002 and he was the Guest Editor for the IEEE JSSC for ESSCIRC 2003 and ESSCIRC2007. He is Associate Editor for the IEEE-JSSC since 2014. He was the General Chair of IEEE-PRIME2006, AACD2008, AACD2013, and IEEE-PRIME2013, AACD2016. He is (has been) the member of the Technical Program Committee of several international conferences (ISSCC, ESSCIRC, AACD, DATE, etc..). He is serving since several years the ESSCIRC TPC as Data Converter Subcommittee Chairman. He has been the secretary of the European Committee of ISSCC Technical Program Committee. He is the founder and the Chairman of the IEEE Solid-State Circuit Society Italian Chapter.