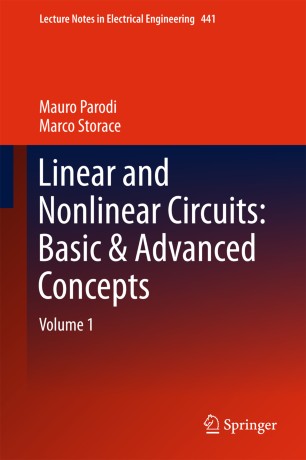 This book provides readers with the necessary background information and advanced concepts in the field of circuits, at the crossroads between physics, mathematics and system theory. It covers various engineering subfields, such as electrical devices and circuits, and their electronic counterparts. Based on the idea that a modern university course should provide students with conceptual tools to understand the behavior of both linear and nonlinear circuits, to approach current problems posed by new, cutting-edge devices and to address future developments and challenges, the book places equal emphasis on linear and nonlinear, two‐terminal and multi‐terminal, as well as active and passive circuit components. The theory is developed systematically, starting with the simplest circuits (linear, time-invariant and resistive) and providing food for thought on nonlinear circuits, potential functions, linear algebra and geometrical interpretations of selected results. Contents are organized into a set of first‐level and a set of advanced‐level topics. The book is rich in examples and includes numerous solved problems. Further topics, such as signal processing and modeling of non-electric physical phenomena (e.g., hysteresis or biological oscillators) will be discussed in volume 2.