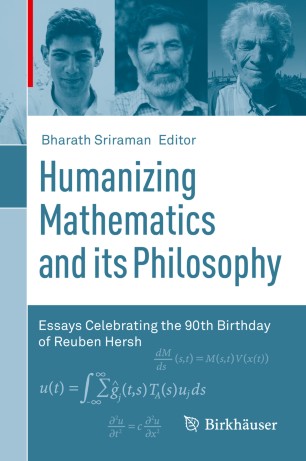 Humanizing Mathematics and its Philosophy

This Festschrift contains numerous colorful and eclectic essays from well-known mathematicians, philosophers, logicians, and linguists celebrating the 90th birthday of Reuben Hersh. The essays offer, in part, attempts to answer the following questions set forth by Reuben himself as a focus for this volume:
The essays also offer glimpses into Reuben’s fertile mind and his lasting influence on the mathematical community, as well as revealing the diverse roots, obstacles and philosophical dispositions that characterize the working lives of mathematicians.
With contributions from a veritable “who’s who” list of 20th century luminaries from mathematics and philosophy, as well as from Reuben himself, this volume will appeal to a wide variety of readers from curious undergraduates to prominent mathematicians.

“This book presents a rich variety of essays. I would encourage readers to dip into the book, picking and choosing the essays that fit their interests. They will be rewarded.” (Joel Haack, MAA Reviews, August 04, 2019)

“This Festschrift … is a wonderful collection of nearly thirty essays exploring the ideas that Reuben made his life’s work. The book begins by introducing us to Reuben, first in a lively interview with him and then by sharing with us a dozen family photos. By the time we begin reading the serious essays, we already feel as if he is a good friend. Many of the contributors have known and worked with Reuben for many years, and the warmth of their friendships is quite apparent.” (John J. Watkins, The Mathematical Intelligencer, Vol. 41, No. 2, 2019)

Bharath Sriraman has collected in this book 27 texts, comprising five chapters from Hersh himself (including one interview with the author), and 22 texts from authors whose work has been influenced by Hersh. These are mathematicians, philosophers, logicians, and linguistics, and altogether they offer the reader a cornucopia of lives, visions, positions, and contradictions about the nature of mathematics and its role in science and society.” (Alexandre Pais, Educational Studies in Mathematics, Vol. 99, 2019)

Bharath  Sriraman has collected twenty-five essays from mathematicians and  philosophers, an educator, and a linguist for a Festschrift volume to  celebrate Hersh’s ninetieth birthday. As one might expect, this is an  extremely varied collection of articles. Several contain heartfelt  appreciation of Hersh. Some attempt to develop and elucidate his  Humanist philosophy. Others just mention him in passing or not at all. A  few contain some nontrivial mathematics. … Anyone interested in the  philosophy of mathematics will profit from reading and engaging with  it.” (Joseph Auslander, Notices of the AMS, Vol. 65, No. 11, 2018).