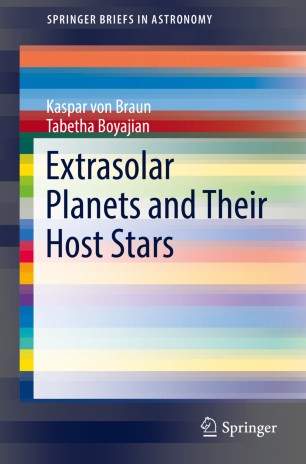 Extrasolar Planets and Their Host Stars

This book explores the relations between physical parameters of extrasolar planets and their respective parent stars. Planetary parameters are often directly dependent upon their stellar counterparts. In addition, the star is almost always the only visible component of the system and contains most of the system mass. Consequently, the parent star heavily influences every aspect of planetary physics and astrophysics. Drs. Kaspar von Braun and Tabetha Boyajian use direct methods to characterize exoplanet host starts that minimize the number of assumptions needed to be made in the process.
The book provides a background on interferometric techniques for stellar diameter measurements, illustrates the authors' approach on using additional data to fully characterize the stars, provides a comprehensive update on the current state of the field, and examines in detail a number of historically significant and well-studied exoplanetary systems.

Dr. Kaspar von Braun is presently an astronomer at Lowell Observatory following his stays at the Carnegie Institutions for Science, the California Institute of Technology, and the Max-Planck Institut für Astronomie. He received his PhD in Astronomy and Astrophysics from the University of Michigan. He is a member of the American Astronomical Society, Deutsche Physikalische Gesellschaft, and the International Astronomical Union.
Dr. Tabetha Boyajian earned her PhD from Gerogia State University. She continued her research at GSU as a Hubble Fellow, and at Yale University as a postdoctoral fellow. She is currently an assistant professor in the Department of Physics and Astronomy at Louisiana State University.