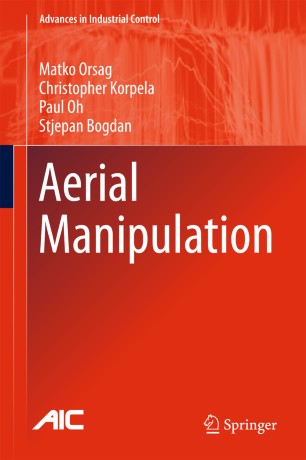 This text is a thorough treatment of the rapidly growing area of aerial manipulation. It details all the design steps required for the modeling and control of unmanned aerial vehicles (UAV) equipped with robotic manipulators. Starting with the physical basics of rigid-body kinematics, the book gives an in-depth presentation of local and global coordinates, together with the representation of orientation and motion in fixed- and moving-coordinate systems. Coverage of the kinematics and dynamics of unmanned aerial vehicles is developed in a succession of popular UAV configurations for multirotor systems. Such an arrangement, supported by frequent examples and end-of-chapter exercises, leads the reader from simple to more complex UAV configurations. Propulsion-system aerodynamics, essential in UAV design, is analyzed through blade-element and momentum theories, analysis which is followed by a description of drag and ground-aerodynamic effects.

The central part of the book is dedicated to aerial-manipulator kinematics, dynamics, and control. Based on foundations laid in the opening chapters, this portion of the book is a structured presentation of Newton–Euler dynamic modeling that results in forward and backward equations in both fixed- and moving-coordinate systems. The Lagrange–Euler approach is applied to expand the model further, providing formalisms to model the variable moment of inertia later used to analyze the dynamics of aerial manipulators in contact with the environment. Using knowledge from sensor data, insights are presented into the ways in which linear, robust, and adaptive control techniques can be applied in aerial manipulation so as to tackle the real-world problems faced by scholars and engineers in the design and implementation of aerial robotics systems. The book is completed by path and trajectory planning with vision-based examples for tracking and manipulation.

Matko Orsag received his Ph.D.E.E. (2008) and B.Sc.E.E. (2003)  from the Faculty of Electrical Engineering and Computing, University of Zagreb. Currently he is working as an Assistant Professor at the Laboratory for Robotics and Intelligent Control Systems (LARICS), Faculty of Electrical Engineering and Computing, University of Zagreb. He graduated summa cum laude for which he received the Josip Loncar bronze plaque. During his undergraduate studies he participated in scientific research, published several papers and received the Rector Award in 2007. In 2011/2012 he worked as a visiting researcher at Drexel University, Philadelphia, PA, USA as a recipient of the Fulbright exchange grant. As a researcher, he participated in several national and international research projects in the field of robotics, control and automation. He authored and coauthored over 20 scientific and professional papers, including journal and conference papers, as well as book chapters in the field of unmanned aerial systems and robotics. He is a member of IEEE and is currently serving as a vice-chair of IEEE Coroatian RAS section.

Christopher Korpela received his PhD.EE (2014) from Drexel University, MS.EE (2006) from the University of Colorado at Boulder, and BS.EE (1996) from the United States Military Academy at West Point. Lieutenant Colonel Korpela is an active duty Army officer and Academy Professor currently serving as the Deputy Director of the Electrical Engineering Program at West Point. Between 2015 and 2016, he collaborated with the Philosophy Program and brought together engineers and ethicists to study Just War Theory and autonomous weapons. The collaboration resulted in receiving the Apgar Award, West Point’s highest teaching award. In 2017, he became the founding director of the Robotics Research Center at West Point. Lieutenant Colonel Korpela has deployed twice to Iraq and served in command and staff positions from company to division level. As a researcher, he has coordinated research projects across the U.S. Department of Defense, academia, and industry in the field of robotics, control, and automation. He authored and coauthored over 20 scientific and professional papers, including journal and conference papers, as well as book chapters in the field of unmanned aerial systems and robotics. He is an IEEE Senior Member.

Prof. Paul Oh joined the University of Nevada, Las Vegas (UNLV) as the Lincy Professor of Unmanned Aerial Systems in 2014.  Prior, he was in Drexel University's Mechanical Engineering Department from 2000-2014 where he founded and directed the Drexel Autonomous Systems Lab.  He received mechanical engineering degrees from McGill (B. Eng 1989), Seoul National (M. Sc. 1992), and Columbia (PhD 1999) universities.  He is a Fellow of NASA (2002), Naval Research Lab (2003), Boeing (2006) and ASME (2012).  He received research (2004 NSF CAREER) and teaching (2005 SAE Ralph Teetor Award for Engineering Education Excellence) awards and authored over 100 publications.  From 2008-2010, he served as an NSF Program Director managing the robotics research portfolio.  From 2012-2015 he led Team DRC-Hubo for the DARPA Robotics Challenge

Stjepan Bogdan received his PhDEE in 1999, MSEE in 1993 and BSEE in 1990 from the University of Zagreb, Croatia. Currently he is a Full Professor at the Laboratory for Robotics and Intelligent Control Systems (LARICS), Faculty of Electrical Engineering and Computing, University of Zagreb. In 1996/97 he worked as Fulbright scholar at Automation and Robotics Research Institute, University of Texas at Arlington. His research interests include autonomous systems, aerial robotics, multi-agent systems, intelligent control and discrete event systems. He is a co-author of 3 books and has published more than 160 conference and journal papers. He is recipient of several national scientific awards. He was the Principal Investigator of numerous scientific projects. He served as an AE of IEEE T-ASE. Currently he is an AE of J. of Intel. and Rob. Systems; Int. Review of Mech. Eng.; Trans. of the Inst. of Meas.&Cont. J. of Cont. Theory and Appl. He served as a Program Committee and Organizing Committee member of major control and robotics conferences and was General Chair of IEEE MSC2012. He is a member of KoREMA and IEEE senior member. He is appointed as a member of IEEE TC on Intelligent Control, representative of Croatia at European Union Control Association (EUCA) and was a vice-chair of Croatian Robotics Society.