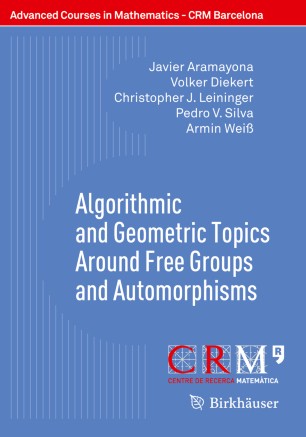 Algorithmic and Geometric Topics Around Free Groups and Automorphisms

This volume presents the lecture notes from the authors’ three summer courses offered during the program “Automorphisms of Free Groups: Geometry, Topology, and Dynamics” held at the Centre de Recerca Matemàtica (CRM) in Bellaterra, Spain.

The first two chapters present the basic tools needed, from formal language theory (regular and context-free languages, automata, rewriting systems, transducers, etc) and emphasize their connections to group theory, mostly relating to free and virtually-free groups. The material covered is sufficient to present full proofs of many of the existing interesting characterizations of virtually-free groups. In turn, the last chapter comprehensively describes Bonahon’s construction of Thurston’s compactification of Teichmüller space in terms of geodesic currents on surfaces. It also includes several intriguing extensions of the notion of geodesic current to various other, more general settings.

Javier Aramayona is a Professor at the Departamento de Matemáticas of the Universidad Autónoma de Madrid, Spain.

Volker Diekert is the Head of the Theoretical Computer Science Group at the University of Stuttgart, Germany.

Christopher J. Leininger is a Professor of Mathematics at the University of Illinois at Urbana-Champaign, USA.

Pedro V. Silva is a full Professor of the Department of Mathematics of the University of Porto, Portugal.

Armin Weiβ is a Research Assistant in the Theoretical Computer Science Group at the University of Stuttgart, Germany.