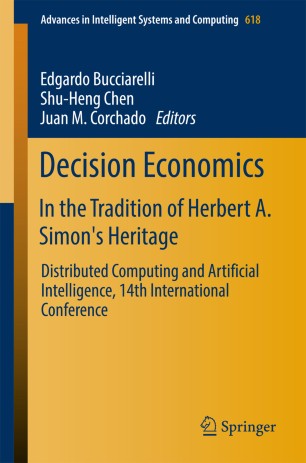 Decision Economics: In the Tradition of Herbert A. Simon's Heritage

Part of the Advances in Intelligent Systems and Computing book series (AISC, volume 618)

The special session on Decision Economics (DECON) is a scientific forum held annually and intended to share ideas, projects, research results, models and experiences associated with the complexity of behavioural decision processes and socio‐economic phenomena. DECON 2017 was held at the Polytechnic of Porto, ISEP, Portugal, as part of the 14th International Conference on Distributed Computing and Artificial Intelligence.

For the second consecutive year, the Editors of this book have drawn inspiration from Herbert A. Simon’s immense body of work and argue that Simon precipitated something akin to a revolution in microeconomics focused on the concept of decision‐making. Further, it is worth noting that the recognition of relevant decision‐making takes place in a range of critical subject areas and research fields, including economics, finance, information systems, small and international business management, operations, and production. Therefore, decision‐making issues are of fundamental importance in all branches of economics addressed both deductively and inductively.

Not surprisingly, the study of decision‐making has seen growing empirical research efforts in the economic literature over the last sixty years and, more recently, a variety of insightful cutting‐edge experimental, behavioural and computational approaches. Additionally, the awareness regarding generalizations and reductions to express economic concepts has led, on the one hand, to an increasing risk of spreading the language of mathematics as a rhetorical tool and, on the other hand, to an oversimplification and overlooking of some crucial details, especially when it comes to human decisions and, hence, economic behaviour. That awareness, however, has helped to produce an extraordinary volume of empirical research aimed at discovering how economic agents cope with complex decisions.

In this sense, the international scientific community acknowledges Herbert A. Simon’s research endeavours to understand the processes involved in economic decision‐making and their implications for the advancement of economic professions. Within the field of decision‐making, indeed, Simon’s rejection of the standard decision‐making models used in neoclassical economics inspired social scientists worldwide to develop research programmes in order to study decision‐making empirically. The main achievements concern decision‐making for individuals, firms, markets, governments, institutions, and, last but not least, science and research.