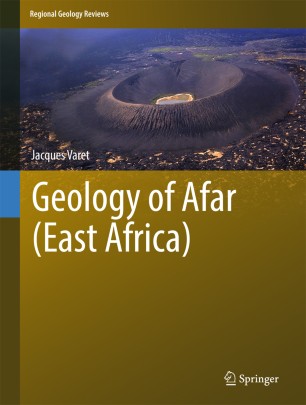 This book summarizes the geological knowledge accumulated on Afar in the last 60 years, demonstrating that it is, and will remain, a real “hot spot” for geological and geophysical research. It provides insights into the Earth processes along diverging plate boundaries, the study of both the continental and oceanic lithosphere and underlying asthenosphere, and margins and transitions including magmatic, volcanic, tectonic, sedimentary, hydrothermal and geodynamic processes.
The Afar triangle is a geological depression that developed where the Gulf of Aden, Red Sea and East African Rift Valley meet. It is considered to be one of the Earth system’s most important mantle plumes. In 1967, when the first expedition was organized, there was little information on the geology of the area, and even geographic base maps were lacking. However, the first satellite photographs from the Apollo and Gemini space missions offered a complete picture of the Red Sea-Gulf of Aden region, providing a new vision of the Afar triangle.
The book describes the unique geological features that make Afar the only place in the world where an oceanic plate boundary with all its successive steps of development can be observed in the open air. It also presents the Afar triangle as one of the cradles of first, now extinct hominids. The Middle Awash area contains sites of several fossil discoveries, such as the well-known Lucy.
The hydrothermal processes in Afar provide conditions suitable for the study of the most primitive forms of life (archaebacterial) and it is also one of the few places where significant quantities of telluric energy are available at the surface for geothermal development. Further, the area has economically interesting mineral deposits and illustrates a number of current climate change issues.
In addition to providing geological information, the book shows that Afar is an area where an individual human population developed with its own language and culture, and which adapted to the rugged landscape and extremely dry and hot climate. It is a valuable resource for scientists and students, and also serves the needs of the Afar nation, currently split in three different countries as a result of recent historical events.